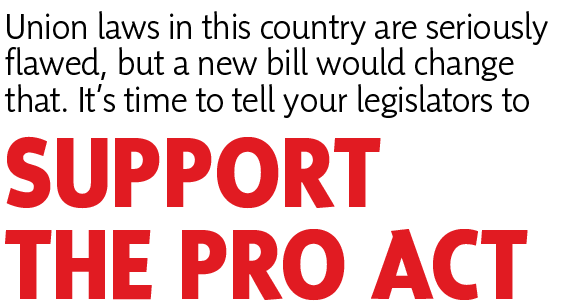 Union laws in this country disfavor unions – but a new bill in Congress could change that. As many union members already know, the National Labor Relations Act and the Labor-Management Relations Act are the primary federal laws that guide labor-management relations in the United States. These statutes work in conjunction with each other to provide a methodology for the conduct of union representation elections as well as the means for the adjudication of unfair labor practice charges alleging violations of the laws’ proscriptions on the conduct of labor relations. The Bureau of Labor Statistics has determined that union members earn 25.6 percent more than workers who are not covered by a collective bargaining agreement. Furthermore, workers who are represented by a union are 28 percent more likely to be covered by employer-provided health insurance and defined pension benefits. These statistics have a direct correlation with the legal framework set forth in these laws and serve to demonstrate how unionization has a beneficial impact upon our economy. However, a close examination of these federal labor laws reveals that they are seriously flawed and essentially stack the deck in favor of management. It is a tribute to labor’s fortitude that there remains any union density in this country at all, especially given the federal government’s current hostility to union organization and negotiation.

Presently there is a bill in both the House and Senate that would shore up loopholes and inequities that presently exist in these statutes. The Protecting the Right to Organize Act (otherwise known as the “PRO Act” or H.R. 2474/S.1306) was introduced this year in both chambers. Every union member (or aspiring union member) should support this legislation. If enacted, it will go a long way to increasing union presence in this country and bolster the middle class, who are vital to the continued success of our democracy. In this article, I detail some of the law’s major highlights.

Currently, federal labor law has no provision for civil penalties in the event the law is violated. Nor is a private right of action available to anyone aggrieved by a violation of the law. The PRO Act provides for statutory penalties if orders of the NLRB are not promptly complied with. Further enforcement mechanisms would be streamlined so that the NLRB would has the legal authority to enforce its orders. Presently, only the U.S. Circuit Court of Appeals have the legal authority to enforce NLRB orders. Additionally, the law does not permit individual workers to sue if they have suffered damages due to a violation of the law. The PRO Act would permit private actions. Strong, prompt and effective enforcement provisions are essential to the administration of justice. Federal labor law is sorely lacking in this respect.

Federal law in its present form excludes many workers from its legal protections. The PRO Act would extend coverage of the law and would make it illegal for workers to be misclassified. Recently, the NLRB held in Velox Express, Inc. (368 NLRB No 61) that an employer’s misclassification of its employees as independent contractors is not an unfair labor practice. This new law would overrule this aberrant decision.

The PRO Act would impose mandatory mediation and arbitration after a new bargaining unit is certified if collective bargaining over an initial contract fails to promptly result in an agreement. This is an essential feature of the proposed law. Almost half of new units fail to reach agreement by the end of the certification year. After that point they are at risk of decertification. Statutory mediation and certification would guarantee that the parties would at the very least achieve a rudimentary initial collective bargaining agreement.

Presently, striking workers can legally be permanently replaced by their employers. In many instances this legal gloss on the law, sanctioned by the Supreme Court, has rendered inert a union’s ability to effectively strike. The PRO Act would overrule that precedent and striking workers could not be legally replaced.

Finally, the PRO Act would eliminate right-to-work laws that prevent unions from collecting agency fees from nonunion members. Right-to-work laws have drained the financial resources of many unions by forcing them to fully and fairly represent workers who do not pay any fees.

This law would ensure the vitality of labor unions for many generations to come. Highlights of the legislation can be found at www.bitly.com/the-pro-act. Please contact your representatives and alert them to your support for this legislation.

In July 2018, I wrote about the case of Neshoma Orchestra, a band devoted to Jewish weddings, functions and events. Since 2012, Neshoma had failed to pay pension contributions, and therefore the AFM pension fund had assessed $1.2 million in withdrawal liability against it. Neshoma then initiated a counter-suit against Local 802, which was dismissed. (For all the details, see my full article at www.bitly.com/neshoma.) Now, the Neshoma Orchestra has filed an appeal of the lower court’s ruling with the U.S. District Court for the Second Circuit of New York. The union has filed its opposition to the appeal and is presently awaiting an oral argument date. I believe that there is a strong likelihood that the lower court’s decision will be affirmed and that Local 802 will prevail. We’ll keep you posted on the results.