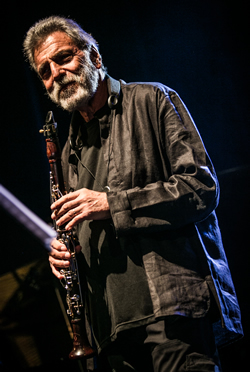 Eddie Daniels, a member of Local 802 since 1957, is that rarest of musicians who is not only equally at home in both jazz and classical music, but excels at both with breathtaking virtuosity. Daniels first came to the attention of the jazz audience as a tenor saxophonist with the Thad Jones-Mel Lewis Orchestra. When Thad and Mel first organized their band in 1966 to play Monday nights at the Village Vanguard, Daniels was one of the first musicians they called. Later that year, he sank $400 into a round-trip flight to Vienna to enter the International Competition for Modern Jazz and won first prize on saxophone. He continued working with Thad and Mel over the next several years and toured Europe extensively with them. A single clarinet solo recorded on the Thad Jones-Mel Lewis album “Live at the Village Vanguard” garnered sufficient attention for him to win Downbeat’s award for new star on clarinet. This conversion to clarinet was not new, for Daniels began clarinet at age 13 and later earned a master’s from Juilliard. A winner of numerous Grammy awards and nominations, Daniels is clearly a renaissance musician, a recipient of unreserved accolades from peers, critics and the public. His overriding ambition is to reach as many people as possible, to enlarge the audience for both jazz and classical music, and at the same time to tear down the walls separating them. In his hands, the music of Mozart is as engaging as that of Charlie Parker and a concert featuring both can be a uniquely rewarding experience for the audience.

Daniels’ father was a garment worker and a one-time musician. He gave his son his old Buescher silver saxophone when he was nine years old. That opened up a world of opportunities and teachers, including early lessons with Aaron Sachs and Ray Musiker. He was accepted into the High School of Performing Arts and started studying clarinet with Jimmy Abato. Later he studied with Daniel Bonade and ultimately Joe Allard.

As a teenager, Daniels auditioned into the Marshall Brown band, where he played with many young musicians who later became famous in their own right: Herbie Mickman, Ronnie Cuber, Mike Abene, Alan Rubin, Bill Vacarro, Eddie Gomez, Larry Rosen and Andy Marsala. The band played at Newport and commissioned pieces from professional composers and arrangers. Coaches included Lou Mucci and John LaPorta.

Eventually Daniels found himself pursuing a degree in education from Brooklyn College. He became a substitute teacher in the NYC school system and began doing club dates on the side.

What happened next was pure magic, but it’s best told in Daniels’ own words. Local 802’s Bob Pawlo recently sat down with Daniels to learn about his amazing musical journey.

Bob Pawlo: Let’s talk about the magical moment when Thad Jones and Mel Lewis discovered you.

Eddie Daniels: I was doing club dates in NYC. Tony Scott hired me to play at the Half Note with him. I was playing tenor sax because Tony would not let me play the clarinet. Tony himself was a clarinetist, and he told me, “You sound too much like Buddy DeFranco!” And what happens? Thad Jones and Mel Lewis walk into the club while I’m playing. I don’t even remember if I met them. A week later, I get a call from Mel saying they’d like me to join their new band. These things happen in real life. A lot of students ask me, “How can I make my career happen?” And I tell them that sometimes there’s nothing you can do. Look, I ended up on my first jazz gig because Tony Scott heard me play somewhere and hired me to play with him, and then suddenly Thad and Mel come in, and now I’m in one of the best big bands that ever was. It was amazingly exciting. I was the youngest guy in the band. I especially loved listening to Roland Hanna, Pepper Adams, Jerome Richardson and Joe Henderson. I was a talented kid, but I can’t really even remember how good I was. I must have been good enough to get on that gig; I had a lot of energy. It was a fabulous experience, and also difficult for me, because I wanted to have more room to play. I wanted to get up and play all the solos. So I’m in that band and everybody’s coming down to the Vanguard on Monday nights to hear us. And before you know it, I was recommended for the Dick Cavett show. I got hired to double on all the saxes: I was called the “swing” player. One day I’d play second alto and the next I’d play lead alto, then I’d have to do the baritone chair. I was playing so much and also doing studio work during the day.

Bob Pawlo: Was this when you also picked up flute? How on earth did you have time to learn a new instrument?

Eddie Daniels: Let me tell you how the flute came along. I left out one little section of my life. After I graduated from college, I started doing Broadway shows, and I got into the pit of “Mame,” which required some flute doubling. I was not a good flute player so I started taking some serious lessons with Julie Baker, Tom Nyfenger and Harold Bennett, the top players in New York at the time. The sound of the flute is not something you can put into words. You fall in love with it. It’s godly music. I was playing sax and clarinet on gigs, but my real home practice was the flute. I knew I had the other stuff in my pocket. Julie Baker was a great teacher in that you could just listen to him. You let his lessons sink into you. Harold Bennett was much more meticulous and organized as a teacher. I’ll tell you a funny story. One day I was actually playing second flute to Julie on a jingle gig. Suddenly he falls in love with the flute that I’m playing. You know, we’re all trying each other’s instruments. He likes my flute, and he says, “This is terrific!” And he followed me home, all the way up to 89th and Broadway. He came up to my apartment. He sat on the radiator in my studio and played “Flight of the Bumblebee” on my flute. He wanted to buy it from me, and I wouldn’t sell it to him. It was my only flute! But we became friends.

Bob Pawlo: You’re a top clarinetist, saxophonist and flutist. What’s your practice routine like these days?

Eddie Daniels: I have a music stand full of stuff that I work on, mostly solo pieces. I don’t practice jazz on the clarinet, but I practice challenging things. I work on control of my fingers. I work on expression and I work on the reeds. I might play sequences just to go through my keys and my scales and maybe a lick or two, something that’s bugging me. But mostly I just love the sound of the clarinet. I love picking it up and practicing parts of the Copland or some etudes, or the Weber quintet. I practice what I don’t know. If you practice what you’re good at, you don’t get much better at what you’re good at, but you can get much better at the things you don’t know by practicing the things that bug you. So, that’s basically what I do. I practice stuff that really kicks my butt, so that I am prepared. I always wanted to eat up everything that I could play and just learn it.

Bob Pawlo: What is it you’re looking forward to in music at this stage?

Eddie Daniels: Just getting better. I’m enjoying tweaking the sound, getting a little bit more of the control. I loved making my new record, “The Heart of Brazil.” It’s a beautiful record because I think the sound and expression are a little bit different from what people have heard on the clarinet before.

Bob Pawlo: What advice would you give to musicians starting their careers now, especially woodwind players who are multi-instrumentalists?

Eddie Daniels: Well, I think you have to master one instrument at a time. There’s a book that Malcolm Gladwell wrote in 2008 called “Outliers: The Story of Success.” In it, he says that you have to spend 10,000 hours on something to master it. I spent a lot of time on each of the instruments that I learned and put in at least my 10,000 hours on each one. When you have a discipline like a musical instrument, you can work on it forever. And I’m still working it, which is really a gift. It gives you something to do in your life instead of watching television. I was very lucky. I wish I could tell young people, “Do this, this, this, and then you’ll get success.” I think the only thing I can say to is play the best you can. Practice. Show your love for the music, and hopefully if you’re good enough, somebody will hear you and will want you to play somewhere, and then others hear you and the ball keeps rolling.

Bob Pawlo: When Pablo Casals was 85 he said, “I’m just learning how to play the cello.”

Eddie Daniels: Right. I feel the same way about the clarinet.

Bob Pawlo: There’s a story that you tell about playing on “The Tonight Show” that I like because it’s about how to play when things go unexpected.

Eddie Daniels: I was booked on Johnny Carson to play the virtuosic piece “Solfeggietto.” It’s a famous test of technique written by J.S. Bach’s son C.P.E. Bach in 1766. I was supposed to play that first and then it would transition into the jazz standard “I’m Getting Sentimental Over You.” I’m waiting in the green room, totally scared. Suddenly someone bursts in and says, “Mr. Daniels, you don’t have to play ‘Solfeggietto,’ because the previous guest went overtime. You’ll just come out and play ‘I’m Getting Sentimental Over You.’” So I got totally relaxed, and went out there. And then Doc Severinsen goes right into “Solfeggietto.” I locked eyes with Johnny Carson. And I dove into it. And it came off really well. And the lesson is that I didn’t have to think about being scared, because the pressure had already left me and there was no time to re-pressure. I went over to Doc afterwards. I said, “Doc, we weren’t supposed to do ‘Solfeggietto.’” All he said to me was, “F*ck ‘em.” What he meant was that he had been looking forward to hearing me play “Solfeggietto” and he wanted to make it happen, no matter what. The whole performance is on YouTube. You can find it. I think the other lesson is that if you don’t think about things too much, you won’t get scared and you’ll find that you can play.

Bob Pawlo: What would you say in closing to your brother and sister Local 802 members?

Eddie Daniels: When I joined the union in 1957, I had to take a test. I had to play some kind of melody on my instrument. I’m so thankful that I passed that test, but I did get a note saying I’d have to come back and take another one. I’m still waiting for that second test! But seriously, being in New York has been a great thing for me. As a kid walking these streets, I met new friends like Jerry Fischer, Mike Abene, Larry Rosen, Dave Grusin and Randy Brecker, musicians like myself who were so excited about jazz and about music. That’s the other advice I can give: if you’re excited about something, enjoy that excitement and pursue it. You can’t manufacture excitement, so if you feel like you’re playing an instrument that doesn’t excite you, find something else to play. The clarinet, the flute and the saxophone – those three instruments – turn me on and just get me excited.