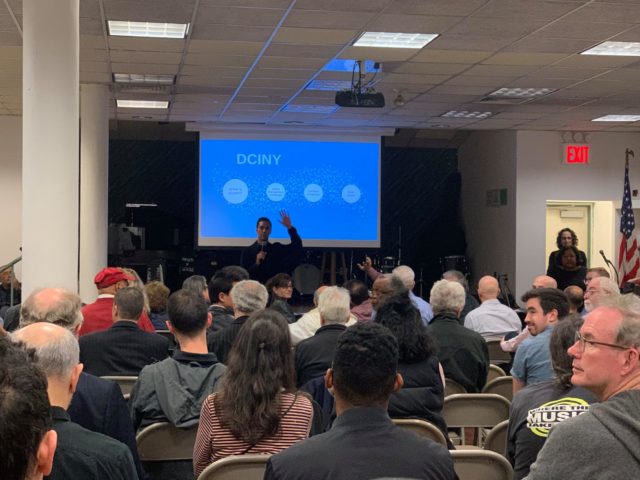 Local 802’s fall membership meeting was the best attended in recent memory. Members passed a new anti-harassment bylaw and got inspired by musicians of Distinguished Concerts International New York, who spoke about their organizing victory.

I often talk about the inevitability of change. As a community of musicians working in an ever-changing industry, we must both drive change and adapt to it. It’s vital to the success and power of our union to develop an approach to change that keeps our union relevant to each generation of members while also creating new opportunities for growth.

With this goal in mind, our latest Local 802 membership meeting marked a major step forward. When 187 musicians showed up on Oct. 23 to participate in our union’s democratic process, the meeting became our most well-attended in recent memory. The high turnout at this meeting showed that musicians in our community have a strong desire to be engaged in their union.

But our success can also be measured by what went on within the meeting. When the new anti-harassment/anti-bullying bylaw amendment passed unanimously, this moment represented the culmination of an unbelievably important and member-driven process.

This amendment’s story began last fall, when it was made clear that musicians felt that our then-current bylaw language did not go far enough to protect musicians from member-on-member harassment. Realizing that this language hadn’t been updated since 1994, members wanted to see a change. After taking office in January, our administration worked to ensure this issue was discussed thoughtfully and addressed proactively.

Over about five months, the Workplace Harassment Initiative committee met every two weeks to evaluate new sources, research state and federal laws, and collaborate with the new 802 administration, including Managing Director and Senior Advisor Jon Kantor. The committee determined that they needed to address both bullying and retaliation – which state and federal laws do not address in workplace situations – to send a strong and clear message that such behavior will not be tolerated in the 802 community.

At the membership meeting, those months of work culminated in a discussion led by committee member Cecelia Hobbs Gardner that included questions from the floor and respectful debate. Then, in a strong show of support, the membership voted unanimously to pass the amendment. This was a great example of our union’s ability to adapt to much-needed change. From start to finish, this process was proactive, member-driven and democratic, resulting in unanimous consensus.

Later in the meeting, our community was briefed on another member-driven effort that is driving change within our union. For those who are unfamiliar, Distinguished Concerts International New York (DCINY) is a concert presenter that was founded in 2007. They produce about 20 concerts each year, with half using a full orchestra. As of 2018, their revenue was $7.9 million, with a roster of over 160 musicians. About 60 percent of their roster are union musicians. In January, musicians began having conversations with each other to build support for the union.

On July 1, DCINY musicians filed for a union election with the National Labor Relations Board and launched a social media campaign to grow support for the unionization effort. Despite a vigorous anti-union campaign by the employer, 89 percent of the musicians voted in favor of unionization. DCINY musicians then elected a negotiating committee, sent out a bargaining survey to the entire orchestra, and started negotiations for a first contact with management.

DCINY musicians Andy Blanco and Nikki Abissi, both of whom serve on the DCINY Negotiating Committee, gave a presentation to the meeting about how their unionization campaign unfolded with the help of 802 Organizer Lily Paulina, Chief of Staff Joy Winkler, and Communications Associate Maria DiPasquale.

During their presentation, Andy and Nikki were able to answer questions from fellow 802 members, thank musicians who supported the unionization effort, and ask for continued support from our 802 community as they bargain for a first contract.

The DCINY musicians and 802 staff, with the full support and engagement of our 802 membership, are successfully driving change and creating new opportunities for growth as a union. In 2019 this could not be more important for our community. Every musician should see the example of DCINY as the model for change.

Local 802’s fall membership meeting made it clear that you, the musicians of 802, are the union and that together we can successfully and proactively navigate change that will serve to build the power of our union for years to come.