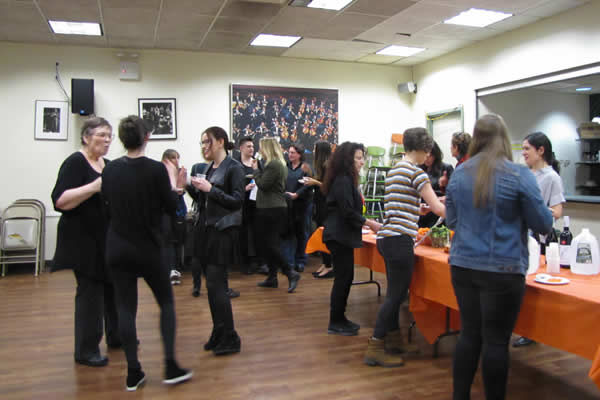 The first meeting of the Women of 802 Caucus offered great ideas, networking and support.

We are pleased to report on the first meeting of the Women of 802 Caucus. Members who were female, female-identifying and non-binary – and their allies – gathered for a curated discussion in the Club Room. Over appetizers and drinks, members made connections that transcended generations and industries.

Women’s committees and caucuses have existed since male and female unions merged in the early 20th century. While men and women in labor have always shared the same goals of fair wages and working conditions, issues of gender inequality naturally emerged in workplaces, just as in the broader society. Local 802 is following in the footsteps of national unions such as the UAW, the Teamsters and the United Postal Workers in creating a space to formulate initiatives in support of gender parity and inclusion, as well as ways of supporting the needs unique to our members who are women, women-identifying, and gender nonconforming.

We opened the meeting with a discussion led by Georgia Stitt (the founder of Maestra and an accomplished composer, lyricist, music supervisor and educator) and Mary-Mitchell Campbell (a Maestra member and music director for “Mean Girls” and “The Prom”). As 802 members and strong advocates of women’s rights in the workplace, they discussed some of the issues they’ve observed and encountered in their careers. After a robust conversation, caucus members broke out into smaller groups to brainstorm ideas for initiatives and programs that could foster support and solidarity among musicians. The proposals suggested by each group generally fell into three categories: intergenerational support, workplace education, and collecting demographic data throughout our industries. 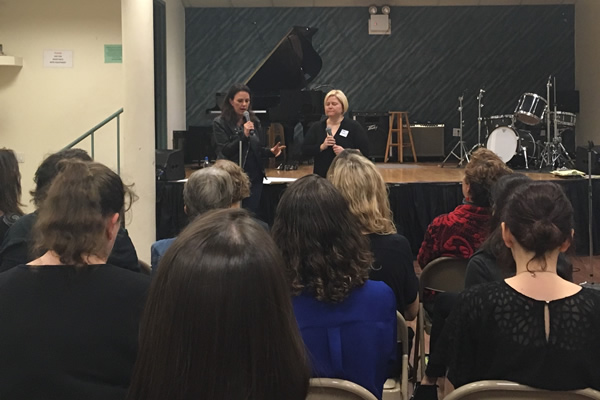 The experiences of each attendee ranged across generations, helping us gain a deep understanding of what’s changed for the better, and what we can continue to push for, as a union. There were members present who remembered going to the “floor” of the Roseland Ballroom, where Local 802 formerly held offices, looking to be hired for a gig. There were also recent music school graduates, some of whom moved to New York only recently, searching for a support system on which to build their fledgling careers. Musicians at every stage of their lives have something valuable to share, and by connecting generations through this caucus, we hope to promote a deeper understanding and appreciation of one another in the workplace. Support for career transitions, whether through retirement or outside of music, is a way to give back to members who have dedicated so much of their lives to music. Networking events and mentorship programs are some ways in which we can bridge various perspectives, and above all, help members withstand inevitable changes throughout the musical landscape.

Women are not a homogenous bloc, and our caucus strives to be a safe space for self-expression. Recognition of all gender identities, including gender nonconforming and nonbinary members, is essential to our mission of gender parity through our union. Acknowledging people by their preferred pronouns and supporting freedom of expression, such as through dress, are ways in which we can build a robust support system and increase union solidarity.

There is much work ahead in realizing our goals, but the feeling of warmth and excitement in the room sparked hope for what we could achieve together. Through a series of smaller working groups, we are in the process of developing some of the initiatives we outlined at our first meeting. If the mission of Women of 802 resonates with you and you are interested in joining us at our next caucus meeting, or becoming involved in a project, please e-mail womenof802@local802afm.org.

This article was contributed by Elise Frawley and the Women of 802 Caucus.