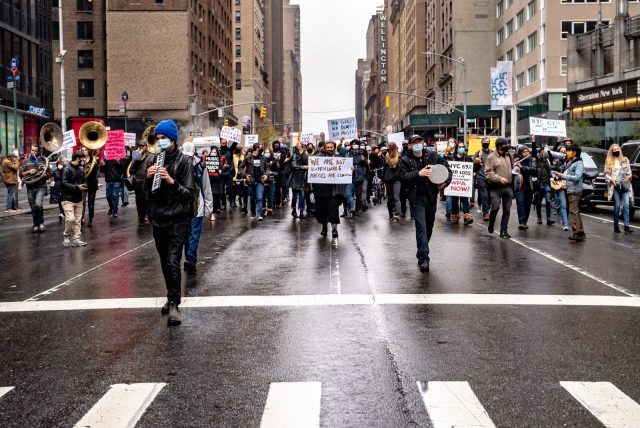 After two terms as your recording vice president and some 20 years as an elected officer of Local 802, I have made the decision to not seek re-election and will retire from union leadership at the end of December. Looking back, I can say that this work has been both the most fulfilling and yet incredibly challenging experience of my life. That statement barely expresses the depth of my feelings. The transition to a full-time officer position in 2016 following 40 years as an active Broadway, studio and touring guitarist was a major leap, one well beyond my experiences as a member of the Executive Board and, prior to that, the Trial Board.

A little history: Back in 2000 Jack Gale, the great trombonist and long-time member of the Executive Board, proposed that I accept an appointment to fill a vacancy on the Trial Board. Quite frankly, I initially resisted his offer but Jack kept working on me. I was busy at that time: performing, working on a music business master’s degree at NYU, working full time at the Sony Classical label and raising two sons as a single dad. It all made for a very full plate. My earlier experiences with Local 802 were mixed and I could not see the benefit to getting involved. As with most 802 members, what went on inside the local was a mystery to me. But I had immersed myself in all things “music industry” at that time and ultimately decided to see what this union universe was all about. It was a life-changing decision. Thanks, Jack, for persevering with me!

Moving to the Executive Board in late 2006, the ensuing years were a crash course in union governance, collective bargaining, and learning to work with staff and my fellow elected officers. I studied at Cornell University’s Union Leadership Institute in 2008-09 to get a more formal education in organized labor history and learn about best labor practices. I saw the common threads that ran through the world of work and found that we musicians were part of a much bigger labor environment. Maybe we were not as unique as I liked to think. Although we quite rightly see ourselves as artists, our employers think of us as labor. It turned out that the issues we experience on the job are not far removed from those of other workers, whether that work is on an assembly line, in a classroom, or on a stage. We all need reliable agreements that are bargained fairly and can be enforced; we need pay increases over the life of an agreement; we need health care and pension contributions; we need a safe workplace; we need protection from unfair treatment and discrimination; the list goes on, but these are basic to all workers. So much for my idea of our elite status.

In 2007, as a member of the executive board, I viewed the Jazz and Indie music community as important fields of work in need of greater union resources and potentially open to organizing. I was certainly not the first to try to address this as an opportunity but I began by talking with many notable musicians to better understand our union’s failings in organizing those fields of work and to assess our potential to succeed. There was some incremental progress. The Winter JazzFest agreement was a first for the Jazz and Indie community and it is now in its tenth year under an 802 contract. Later, when I became the RVP in 2016, we created the Jazz Mentors series that to date has presented 20 live panels featuring top name Jazz artists speaking on career building, opening the club room to both members and non-members. We re-booted the dormant Jazz Advisory Committee and brought some new faces into the union hall. And finally, with the initiation of Student Jazz Jams, we welcomed aspiring high school musicians into the club room to experience a safe environment in which to sharpen their skills with professional accompaniment and hear positive critiques. That was a joyful series to see develop. These are all successes to give one hope but alone are not enough to change the course our union is on. Now others will need to build on these first steps.

Now, with retirement looming, I feel that have truly given my all to you, the members, who deserve the very best union possible so that your creative lives are enhanced by our efforts on your behalf. There is no perfect union but ultimately Local 802 must reflect the needs and wishes of its members. In seeking progress our members have voted for major leadership changes over the past decades. I am currently serving in my fourth 802 administration and each has had its own agenda, its strengths and its weaknesses. The important takeaway is that Local 802 and the AFM must continue to evolve and face the undeniable changes to our business. Present day online streaming channels have allowed our music to be widely heard but have resulted in enormous losses in revenue for creative people. The ever-evolving digital recording technologies and the globalization of music production have forever altered our workplaces, nowhere felt more than in what were once the centers of music recording, New York and LA. For we musicians this is an existential crisis without simple solutions.

We are facing steep challenges to union organizing in the live music environment, as well. These are exacerbated by our own lack of solidarity and further hurt by the downward pressure on wages caused by a free-market mentality. It has brought about the oft-described “race to the bottom” effect of crushing the wages we need to have sustainable careers. Despite such obstacles, our local must plan strategically and build up our membership numbers to enable real leverage when we bargain. Our members need to recognize the hurt done to our community by a cash-and-carry mentality and act collectively to change hearts and minds about work not covered under a reliable union agreement.

Unions live or die by devoting resources to organizing. Encouraging members to learn how organizing can be done effectively is part of the education that should come along with a membership card. We may never see the membership numbers that Local 802 had in the mid-1950s when much of the good work was unionized. However, we can strive to rebuild and develop a new degree of trust and interest among our membership and among the thousands of unaffiliated musicians who could benefit from what union membership has to offer. As it currently stands, we are not in tune with that significant body of unaffiliated musicians. Let’s start by recognizing that this segment of our community is likely far larger in number than those we presently cover under union agreements. We need that new energy.

The work to grow our union must continue, for everyone’s sake. The alternative is a continued downward spiral with our strength diminished and our credibility challenged. I fervently hope that during the term of the coming administration, and those which follow, Local 802 will put its resources to work in what must be seen as our critical mission. I present that as a challenge that must be met for our collective survival as professionals. We need our members to become full participants in this effort. Bring your good ideas, your energy, and desire to see a better world for musicians. Join committees, learn the ropes of organizing and how to successfully work inside the structure of a labor union to get positive results. It is not an easy road but I for one am glad to have travelled it.

So, off the soapbox. I am looking forward to making music again with my friends and I am glad I kept my chops up during the last six years! I have an expanding family to tend to as a new grandpa and the pleasure is all mine in that regard. I hope to travel more frequently with my dear wife Jody, who withstood the 24/7 interruptions that come with the job of union officer. She has been with me for the entire 20-year union ride, which deserves a medal for patience. I wish to thank all of my fellow officers through the years for their dedicated hard work and offer a special acknowledgment to the staff members of Local 802, past and present, for their tireless efforts behind the scenes on behalf of all members. They are rarely noticed except by those of us who rely so much upon everything they give to the job.

Again, my thanks to the members of Local 802 for your continued trust and support. It’s time to rejoin the community as a rank-and-file member with my best wishes for the success of the coming administration in 2022.