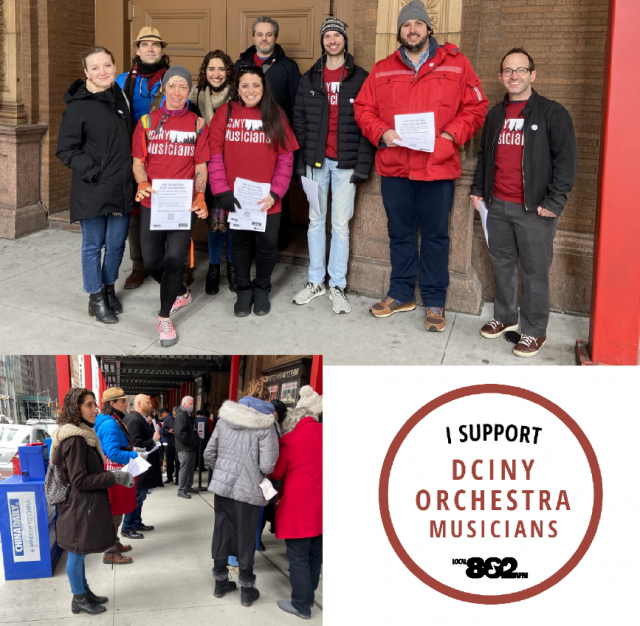 Musicians of the DCINY orchestra took to the street to stand up for live music and a fair contract. See more photos here.

After a hiatus of more than two years, Distinguished Concerts International New York returned to Carnegie Hall in late March to perform Faure’s “Requiem.” Various amateur choral groups from around the country paid to participate in the concert.

However, one thing was missing from the performance: the full orchestra. Just a few years ago, DCINY had performed the identical work with over 50 instrumentalists. This time, there were three. So what’s changed since then?

The answer is clear. Two years ago, musicians voted to certify Local 802 as their bargaining representative. While negotiating a first contract with its musicians, DCINY is seeking to use the pandemic as an excuse to retaliate against members of the DCINY orchestra. In fact, DCINY is basically threatening to eliminate the entire bargaining unit through a proposed audition process.

Local 802 successfully won an Unfair Labor Practice charge against DCINY for failing to negotiate prior to their return to live performances. The company agreed to negotiate at least twice a month, but actual progress at the bargaining table has been minimal to nonexistent.

So, when DCINY returned to the Stern Auditorium/Perelman Stage on March 27th without its orchestra, the musicians did not sit at home. Instead they took to the street and handed out leaflets to audience members and the general public, advising them that an orchestra was not being used, and that this appeared to be a hard bargaining tactic.(Download a PDF of the leaflet here or see a copy at the bottom of this article.) Carnegie Hall stagehands, who are represented by IATSE, joined in solidarity with the musicians by wearing buttons that said, “I support DCINY musicians.”

“This isn’t just about our orchestra,” said the DCINY Negotiating Committee in a statement to Allegro. “It’s about standing up for live music everywhere. If DCINY can replace 50 musicians at Carnegie Hall, what’s to stop other employers from doing the same? When we come together as a community of musicians, we have the power to protect each other and our livelihoods. The choir members and audience members we spoke to were overwhelmingly receptive and supportive of our desire for a fair contract. It also felt great to show our solidarity with our colleagues in person again!”

DCINY has scheduled other performances over the next two months, but the orchestra remains unhired for any of these performances as well. Shame on the company!

How can Local 802 members support the musicians and stand up for live music? 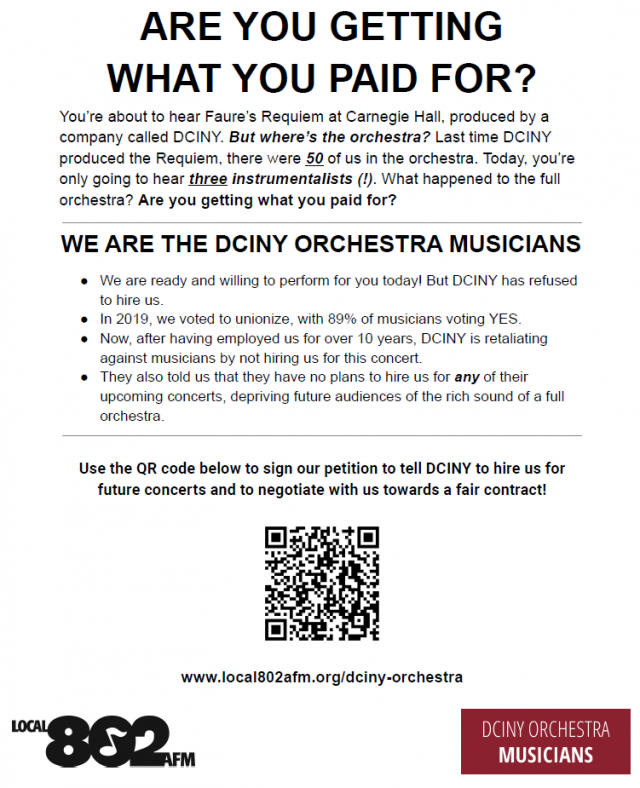