It’s been a very busy four weeks for the new administration of Local 802. To say we hit the ground running would be an understatement. One of the first things I accomplished as Recording Vice President was to convene a building safety and reopening committee to discuss the parameters of re-opening Local 802 to its members. The committee, composed of Executive Board members Martha Hyde, Debbie Assael and Sara Cutler and myself, will be meeting on a regular basis to develop a viable plan to reopen the building as well as the club room. We are discussing what the time frame will be for this to occur. Rest assured that this is a priority for us. We also intend to address capital improvements to the building, if any, that may be necessary for Local 802 to reopen the building safely and effectively. One of those capital improvements is reopening the third floor and moving my office as well as several staff to that floor as well. I look forward to the day when I can welcome members back into the building in my new office. I am also very pleased to report that Local 802 has rehired Maureen Cupid Pierre, a longtime Local 802 staff member who served as the executive assistant to several prior Recording Vice Presidents. Local 802 eagerly welcomes her back. She is a huge asset to the union.

Recently the Local 802 recording department has mailed out a large volume of recording work dues invoices. Wage payments have already been made for these invoiced amounts. Due to several factors, a moratorium was placed on submission of work dues invoices and the ones going out are dated November 2021. Part of the reason for the delay is Local 802’s desire to provide payments to its members prior to its new computer system having the ability to process and input recording payments. I am now advised that the system is ready to process these payments. If there are any issues with these invoices, please contact Local 802 at membership@local802afm.org.  I am also exploring the means by which Local 802 can automatically deduct work dues from recording payments that Local 802 receives. My understanding is that dues checkoff authorizations have been signed in many cases but that reuse payments have not typically applied those authorizations. In any event, the process would be much easier and efficient if we could eliminate invoicing and deduct work dues automatically, with proper accounting to recipients.

I am also happy to report that the National Labor Relations Board has sided with us and determined that Distinguished Concerts International New York violated the National Labor Relations Act and engaged in bad faith bargaining by failing to schedule negotiation dates with Local 802 and the orchestra bargaining committee. As a result of this decision, DCINY has agreed to schedule negotiations every other week (beginning on February 10) and also agreed that the union’s majority status will not be questioned for an additional year, thus giving Local 802 additional time to negotiate a collective bargaining agreement. I extend my gratitude and compliments to the orchestra committee for its fortitude and resolve in staying the course in their effort to achieve a fair agreement despite all the obstacles that have been placed before it. It will not be long before we return to the bargaining table.

Further, we are on the cusp of commencing negotiations with the Kaufman School, Midori & Friends, the Apollo Theatre, and the club date employers. As of yet I do not have a full bargaining committee formed for upcoming club date negotiations, which will most likely commence in March or April. If you wish to be a part of the bargaining team, please reach out to Pete Voccola at pvoccola@local802afm.org. I am very pleased to report that Tony Gorruso has volunteered to join the bargaining committee and extend his considerable knowledge of the club date field to our efforts.

Finally, I would like to share some good news that effects some Local 802 members who perform with the Springfield Symphony Orchestra. SSO management has just agreed to settle the unfair labor practice charge that AFM Local 171 and myself had filed against it. The settlement entails a payment of approximately $270,000 to musicians who would have performed during the 2021-2022 season. SSO had refused to send out hiring notices to its musicians. By violating the status quo terms of its expired agreement with Local 171, SSO had breached its obligations under the National Labor Relations Act. These funds will be used by the musicians of the Springfield Symphony Orchestra, who have formed a nonprofit entity, to put on independent concerts at union wages within Springfield and the surrounding area. SSO musicians have created a petition to demand the resignation of several members of the SSO Board who are determined to contract the size and scope of this fine orchestra under the guise of a non-existent fiscal crisis. Their endowment contains several million dollars and has actually grown during the pandemic. Here is a link to the petition. Please take a moment to sign it. 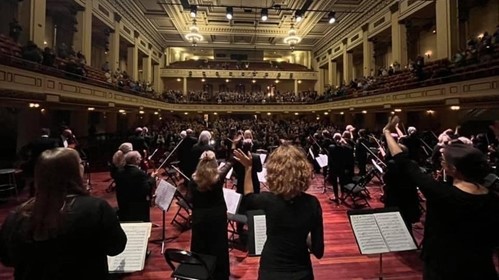 The musicians of the Springfield Symphony Orchestra are performing union concerts on their own initiative. Sign their petition here: https://www.change.org/SSO6Resign