The NYU Broadway Percussion Seminar will take place June 14 to June 18, and the registration deadline is April 15. Register at www.steinhardt.nyu.edu/programs/percussion-studies/summer-workshops/nyu-broadway-percussion-seminar

For those who want to know more about the NYU Broadway Percussion Seminar, below is an inside look at what happened last June… 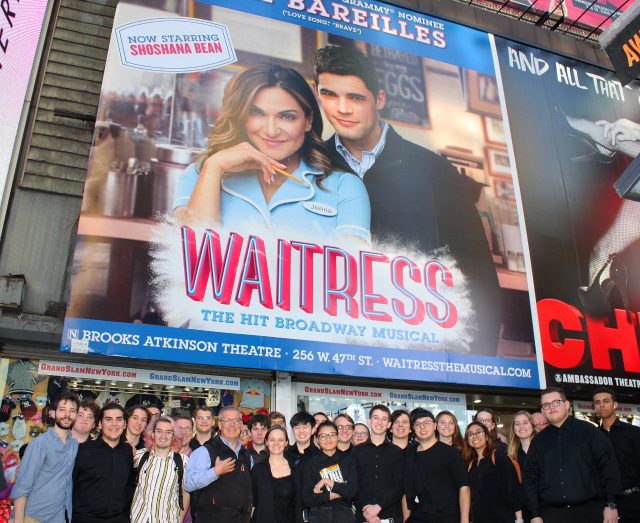 Percussionists look forward with anticipation to each June when the NYU Percussion Studies Program — along with Jonathan Haas and Sean Statser — host the NYU Broadway Percussion Seminar. This is an incredible opportunity for young percussionists from across the country to network and learn from Broadway regulars and subs about the musical and professional skills of a successful career playing theatre at the highest level.

Last year’s NYU Broadway Percussion Seminar started on a Sunday night with Haas and Statser going over the schedule for the week and what to expect and NYU alumnus Sean Perham presenting “Stomp,” the Off Broadway phenomenon that recently celebrating its 25th year at the Orpheum Theatre. Perham has been a member of the New York cast for over a year and is one of three recent NYU percussion graduates to earn a position with the storied production. Perham took attendees through a simulation of the audition process for “Stomp” and talked about the skills of improvisation, comedy and thinking on your feet.

Monday morning featured two new presenters to the NYU Broadway Percussion Seminar in Sean McDaniel and Dave Mancuso of the Disney hit “Frozen.” The pair of veterans gave the yearly “Broadway 101” session, introducing the attendees to the world under the stage. McDaniel coached players through issues of balance and groove in his drum parts, while Mancuso explained some of the tricks he uses to create complex shaker patterns and get around his expansive setup — even including two Dresden-style timpani!

That afternoon was spent with Josh Samuels, a return presenter to the NYU Broadway Percussion Seminar. Samuels had presented previously about playing at Radio City Music Hall, but this session focused on his current hit Broadway show “Beetlejuice.” Samuels talked about his long and determined career through playing on cruise ships, Radio City and working his way through the New York freelance scene for years before landing his first Broadway production. The most important message Samuels had for the students was playing on Broadway is so incredibly difficult that you have to be unbelievably passionate about it in order to stay in it long enough and work hard enough to see the payoff.

Saporito presented on his experience playing percussion for the Tony Awards broadcast, which the attendees had watched together on Sunday night after Perham’s clinic. He talked about the process of pre-taping some cues and playing others live — and the fact that the orchestra never knows who will win the awards until they see it on the stage live, giving them just seconds to pull up the right music! Saporito also talked about his decades of experience in Broadway pits and in recording studios for albums, jingles and film scores.

Tuesday morning began with Kory Grossman presenting “My Fair Lady,” playing both drums and percussion on what is commonly known as a combined book. Grossman talked about the choreography needed to get around his almost claustrophobic setup and his tricks of the trade to make instrument switches possible — including attaching a mallet directly to the bass drum and rearranging the order of his chimes! Grossman also brought the video of conductor Ted Sperling — music director of NYU’s new Broadway Orchestra — for him and the students to play along with, giving the most realistic possible feel to playing through the show.

The afternoon session was on “Ain’t Too Proud” with Dr. Javier Diaz — newly-appointed member of the percussion faculty at NYU. Diaz is well known as a Latin specialist, but also talked about his symphonic background, including playing with the Los Angeles Philharmonic during his undergraduate degree. This convergence of skills has led to an exciting career for Diaz, playing tumbao and guaguanco one night and Puccini the next. Diaz talked about the deceptive difficulty within his seemingly simple book and the many examples of him adding something to the music that isn’t on the page to make the show come alive. His creativity and limb independence allows him to sound like multiple players, which along with the drummer and a second percussionist drives the Broadway version of the music of the Temptations.

The night session was the annual “Super Sub” clinic about the most common entry to playing on Broadway, working as a substitute player. This year’s session was given by Andy Blanco, who was subbing five shows at the time. Blanco brought with him excerpts from “King Kong,” “The Cher Show,” “The Lion King,” “Frozen” and more! Talking about the difficulties of working as a sub, with none of the job security of a regular and needing to keep track of multiple shows at once, Blanco expertly demonstrated the versatility required of the role. He also talked about the difference in mindset. As a regular, he spoke about how creativity and working with the show’s creators are an essential skill to add something to the production, while a sub’s goal is to mimic the regular’s work as perfectly as possible, regardless of personal style. Blanco also left the attendees with one message that was received loud and clear — if you want to work these days as a Broadway percussionist, learn how to play hand drums!

Wednesday started with a session about college admissions brought by members of the NYU admissions department, including recent NYU Percussion Program graduate Declan Zhang. Shortly after however, came the main event of the week — the whole NYU Broadway Percussion Seminar went up to Times Square! Each of the 27 attendees of the program saw two shows on Wednesday: one from the house and one from the literal “room where it happens” — in the pits and isolation rooms with the players.

The dinner break between the matinee and evening brought everyone together for New York pizza and an in-depth discussion with Local 802 officers Karen Fisher and Andrew Schwartz. They talked about the collective bargaining role of Local 802 and its place within the context of the AFM, while Haas added some historical context about the role of unions in the larger labor history of the United States as a whole. The conversation included the changing landscape of music business and the effects of streaming on the livelihood of working musicians — and some issues like the effect of negotiated residuals on where certain recording work is being done. This discussion always proves to be one of the most insightful and eye-opening experiences for the participants coming from around the world and to have the opportunity to spend time with Local 802 experts and veterans is invaluable.

In what is becoming an NYU Broadway Percussion Seminar tradition, Thursday began with the week’s final presentation of “Beautiful,” featuring Joe Passaro on percussion and Ray Marchica (sub for Clint de Ganon) on drum chair. Marchica talked about matching his sound to de Ganon’s by playing the same parts and not playing rim shots on the snare drum in places where that might be his musical instinct. Passaro spoke at length about technique on handheld tambourine, shaker and hand drums, his choreography during fast instrument changes and places in the book where he was able to give the orchestrator more than was expected through creative problem solving. Marchica and Passaro also passed on many stories of their lives in the Broadway trenches, which were fascinating and enlightening to the young audience.

And the NYU Broadway Percussion Seminar came to a close Thursday afternoon with the roundtable session, which brings back the presenters from throughout the week, along with a yearly guest in Broadway contractor John Miller. This year also included a new face in retired business owner Mike Balter, known in the percussion community for the mallet company he founded which bears his name. Jon Epcar, drummer of the Tina Fey musical “Mean Girls” also attended the enthralling three-hour session on what it really takes to make a Broadway career happen. The discussion also talked about how to effectively get the attention of a contractor and strategies for navigating a personal life, marriage and family in such an unpredictable work environment.

This was yet another remarkable edition of the NYU Broadway Percussion Seminar, made possible by Local 802, NYU Steinhardt, NYU Percussion Faculty Jonathan Haas and Sean Statser, the presenters and of course the attendees, who came more prepared and interested than ever. It was a great week and we at NYU can’t wait to do it again this summer…on Zoom!

The deadline to register is April 15. Register now at www.steinhardt.nyu.edu/programs/percussion-studies/summer-workshops/nyu-broadway-percussion-seminar

Sean Millman is a Ph.D. candidate in percussion performance at NYU.