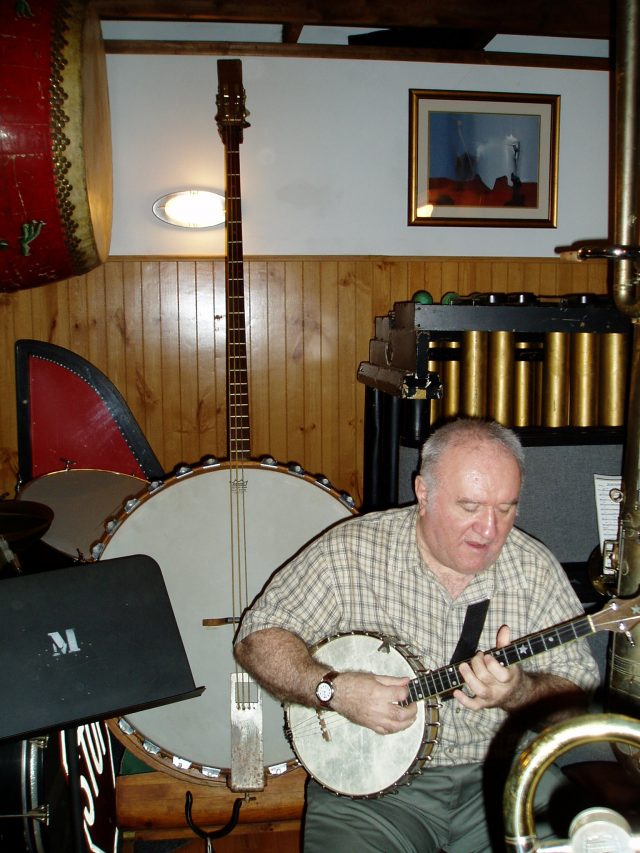 The banjoist Eddy Davis died on April 7 at the age of 79 due to complications of the coronavirus. He had been a member of Local 802 for over 40 years. He is survived by his daughter Lucie and his longtime life partner, Ruth Miller. Here is a personal remembrance by Local 802 member Scott Robinson:

I’ve just lost one of the dearest friends I’ve ever had in music. Eddy Davis was a highly significant and influential presence in my life. He was a fiercely individualistic performer, a veteran of the old Chicago days when music was hot, joyful, exuberant and unselfconscious. A character and a curmudgeon, who could hold court for hours after the gig. And a loving mentor who helped younger musicians like myself learn and grow in this music.

I had only played with Eddy a handful of times when he called me in late 1998 to say that he was forming a new band to fill a weekly Wednesday spot at the Cajun on 8th Avenue. He wanted me to play lead on C-melody saxophone, in a little group with two reeds, and no drums. This by itself gives a clue to what an original thinker he was.

I already knew that Eddy was a proficient and highly individualistic stylist on the banjo, who sounded like no one else. What I didn’t know, but soon found out, was that this man was also a walking repository of many hundreds if not thousands of tunes of every description, ranging far beyond the standard repertoire… with a fascinating background story at the ready for nearly every one. I quickly learned that he was also a prolific and idiosyncratic composer himself, with a wonderfully philosophical work ethic: Write original music every day, keep what works, and throw the rest away without a backward glance.

Eddy was also what used to be called a “character”: affable, opinionated, hilarious, and irascible all in one, and above all highly passionate about music. What I learned over the ensuing 7.5 years in Eddy’s little band, I cannot begin to describe. I came to refer to those regular Wednesday sessions as my “doctor’s appointment” — for they fixed whatever ailed me, and provided the perfect antidote to the ills of the world, and of the music scene. Over the years we were graced with the presence of some very distinguished musicians who came by and sat in with us, including Harry Allen, Joe Muranyi, Bob Barnard, Howard Johnson, and Barry Harris.

Eddy was generous with his strong opinions, with his knowledge and experience, and with his encouragement. But he was a generous soul in other ways as well. When he heard that I was building a studio (my “Laboratory”), he had me come by his apartment and started giving me things out of his closets: a Roland 24-track recorder, three vintage microphones, instruments… things that I treasure, and use, every single day of my life. When my father turned 75, Eddy came out to the Lab in New Jersey and played for him, and wouldn’t take a dime for it.

When I got the call last night that Eddy had passed — another victim of this horrible virus that is ruining so many lives, and our musical life as well — I hung up the phone and just cried. Later I went out to my Laboratory, and kissed every single thing there that he had given to me. How cruel to lose such an irreplaceable person… killed by an enemy, as my brother David commented, that is neither visible nor sentient.

One night at the Cajun stands out in my memory, and seems particularly relevant today. It was the night after the last disaster that changed New York forever: the World Trade Center attack. There was a pall over the city, the air was full of dust, and there was a frightful, lingering smell. “What am I doing here?” I thought. “This is crazy.” But somehow we all made our way to the nearly empty club. We were in a state of shock; nobody knew what to say. I wondered if we would even be able to play.

We took the stage, looked at each other, and counted off a tune. The instant the first note sounded, I was overcome with emotion and my face was full of tears. Suddenly I understood exactly  why we were there, why it was so important that we play this music. We played our hearts out that night — for ourselves, for our city, and for a single table of bewildered tourists, stranded in town by these incomprehensible events. They were so grateful for the music, so comforted by it.

The simple comfort of live music has been taken from us now. We must bear this loss, and those that will surely follow, alone…shut away in our homes. I know that when the awful burden of this terrible time has finally been lifted — when we can share music, life, and love again — it will feel like that night at the Cajun. My eyes will fill, my heart will sing, and the joy that Eddy Davis gave me will be with me every time I lift the horn to my face, for as long as I live.