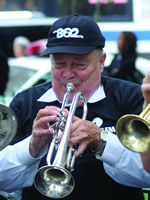 John Amoroso, 88, a vocalist and a trumpeter, died on April 4. He had been a member of Local 802 since 1956. He was my friend, and I want to share the following stories about him.

John grew up in Yonkers, where he attended public schools. He soon became good enough to play with various local and territory bands. At one of these gigs, Tommy Dorsey got to hear him and asked him to join his band as vocalist and trumpeter. John told some interesting stories about playing with Dorsey. One is that when John joined the band, he replaced Frank Sinatra as the band vocalist! Another is that Buddy Rich was his roommate on tours. John also got a chance to appear on TV in a “Honeymooners” episode where the Dorsey band appeared on screen. A final story: after one Dorsey gig, John heard an announcement over the speaker system: “James for Dorsey, James for Dorsey.” He was curious and went backstage. There, Tommy said to John: “Hey kid, meet Harry James,” who was standing there. Harry James, the famous trumpeter and bandleader, was a superstar who had very distinctive, deep blue eyes. John was starstruck and couldn’t talk. He eventually said hello to Harry but told me he was speechless and felt like babbling “Homina homina homina,” like Jackie Gleason!

His stint with Dorsey was interrupted when John got called for military service. He served as a warrant officer and played in military bands. After his service, he returned to the Dorsey band for another two years.

John later joined the ranks of the elite NYC roster of musicians who played top society gigs at the Waldorf Astoria, Plaza Hotel, St. Regis and many other exclusive venues He played for Meyer Davis, Lester Lanin, Peter Duchin, Bill Harrington, Vincent Lopez, and Ray Bloch, with whom he also served as leader/contractor. In time, John became a business partner of the club date office Musical Personalities.

I met John for the first time when we were part of the Harrington Orchestra ensemble that performed at the inauguration party for George Bush at the Smithsonian in 1989. Later that year, I began performing on Broadway in the production of “Gypsy” starring Tyne Daly. I was able to hire John as a sub for my chair, and he was very proud of that gig.

Besides music, John enjoyed playing tennis, eating at great restaurants, and flying his Cessna 182 plane that he co-owned. (He let me try the controls!)

John was full of great stories. Now he’s reunited with all the greats of the past who he’s known. He leaves behind many friends who were as entertained by him as I was. John is also survived by his longtime companion Carole Ripmaster. 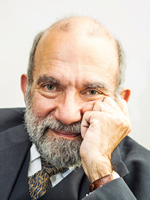 Lou Barranti, 71, a timpanist and a member of Local 802 since 1973, died on March 16. Lou studied under Fred Hinger, then the principal timpanist with the Metropolitan Opera Orchestra, and worked for impresario Sol Hurok. He played in various orchestras including National Ballet of Canada, Swedish Ballet, New York Renaissance Band, and several others, and in 1977 he was hired as the American Ballet Theatre Orchestra’s principal timpanist, a position he held until his death more than 40 years later. Lou met his first wife, Nan Salomon (nee Lee), in 1976 at Lincoln Center. They were married that year and their daughters Annika and Kjrstn were born in 1978 and 1981. After the birth of his daughters, Lou began to seriously focus on his second compelling artistic passion, photography. His photographs of Annika and Kjrstn, as well as his photographs of children and families 1989 – 1993 at the Woodstock Library Fair, have been exhibited in several of Lou’s photographic exhibitions and can be viewed at loubarranti.com. Following his separation from Nan in 1987, Lou worked for several years in Soho specialty shops 80 Papers, The Enchanted Forest, and After the Rain, and began the photography project that would occupy him for over 30 years: The Downtown Waitress Project, which originally featured waitresses from Fanelli Cafe in Soho and later expanded to other New York restaurants. It grew to include waitresses in Youngstown, Ohio, where he lived from 1996 – 2010, and later still, waitresses from the Berlin Bar and Bistro in San Miguel de Allende, Guanajuato, Mexico. Select photographs from The Downtown Waitress Project can be viewed at downtownwaitressproject.com. Lou worked extensively with Local 802 on behalf of his fellow musicians in the ABT orchestra, and from 1995 to 1996, he also worked at the AFM. It was on one of his trips to Ohio a as union representative that he met his second wife, Deb Alexander, a clarinetist in the Youngstown Symphony Orchestra. Lou resigned from the AFM and moved to Youngstown, commuting to New York for the ballet seasons, and he and Deb were married in 1998. They separated in 2010. In 2012, Lou met Phoebe Greyson. Phoebe was splitting her time between New York and San Miguel de Allende, Mexico, and they arranged for their schedules to coincide. He had his first photographic exhibition in San Miguel’s Photographic Gallery in 2012 and a second exhibition at the Berlin Bar and Bistro a year later. Phoebe was involved in theatre, and when the San Miguel Playhouse opened in 2014, Lou became its technical director. Having a natural talent for accents and characterization, he appeared in several plays and became a well-known and beloved member of the San Miguel theatre community. The Playhouse’s most recent production, held after his death, opened with a nightly dedication to his memory. Lou died following a massive stroke, with Annika and Phoebe at his side. Besides them, he is survived by his other daughter Kjrstn; his sons-in-law Will and Nic; and his grandchildren Sam (12), Grace (9), Corbin (3), and Emmeline (born after his death). He is also survived by his siblings Joe, Mary Lou, Jim, Tony, Chrissy, Pete, Matt, Ony and Mike; his ex-wives Nan and Deb, both of whom were dear friends; and his friends around the globe. A memorial show of Lou’s photographs will be hosted at Berlin Bar and Bistro during the month of April. His daughters are working on a book of his photography. 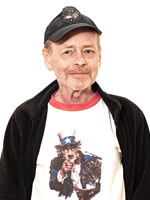 Milton T. Phibbs, a member of Local 802 for almost 30 years, died on March 27 at the age of 69. Milton was born on Nov. 17, 1949 in Takoma Park, Maryland. A graduate of High Point High School in Beltsville, Maryland, Milton showed prodigious musical aptitude from a young age. Although his first instrument was the trumpet, Milton soon switched to the French horn, an instrument he would master and play for his entire career. In 1971, Milton graduated from the Curtis Institute of Music, where he studied horn with the legendary Mason Jones and composition with Matthew Colucci.

Milton quickly became a busy freelance musician. He performed, toured and recorded frequently with the Philadelphia Orchestra – as well as the Minnesota Orchestra – with his longtime friend, Kendall Betts. Other Philadelphia area professional credits include the Concerto Soloists of Philadelphia, Philadelphia Lyric Opera, Grand Opera Company and the Pennsylvania Ballet Orchestra.

Seeking adventure and musical opportunities, Milton moved to New York in the early 1980s and became a mainstay with the Greenwich Symphony Orchestra, Opera Orchestra of New York, Riverside Symphony, Westchester Philharmonic, Brooklyn Philharmonic, Orchestra of Saint Luke’s, the American Composers Orchestra, the Virtuosi Woodwind Quintet and the Orpheus Chamber Orchestra. He also played for various Broadway shows, including “42nd Street,” “Cats,” “Phantom of the Opera,” “Beauty and the Beast,” “The Lion King” and others. Milton performed and recorded with Prof. Peter Schickele and the New York Pick Up Orchestra in the renowned P.D.Q. Bach concert series.

Milton Phibbs was an active and serious composer throughout his career. He had works premiered by the Philadelphia Orchestra, the Minnesota Orchestra and at the Grand Teton Music Festival as well as at New York’s Weill Recital Hall by the Virtuosi Woodwind Quintet. His commercial activities have included arrangements for NFL Films and he composed the music for the interpretive films at the Mount Rushmore Visitors Center for the U.S. National Park Service. Milton was a longtime composer-in-residence and faculty member of the Kendall Betts Horn Camp, an institution that was very near and dear to his heart, which takes place each June in New Hampshire. He continued to hold this post well past his retirement from horn playing in 2010. Milton’s compositions have long been loved by the horn community at large, as he was known for lushly melodic, frequently humorous and fiendishly difficult pieces that reflected both his superb musicianship and razor-sharp wit. In 2018 a tight-knit group of Milton’s friends and colleagues in the NYC horn community gathered to record a collection of his original pieces for horns and percussion. This recording is still available, and it turned out to be Milton’s final professional endeavor. Milton was known and loved by all for his quick wit, self-effacing manner, and unfailing kindness. He will be sorely missed.