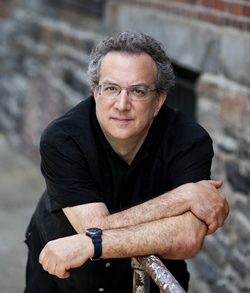 Uri Caine is a true renaissance man. A master jazz pianist and an acclaimed classical composer, Caine attended the University of Pennsylvania, where he studied composition with George Rochberg and George Crumb. He has played with a huge variety of top artists and groups including Philly Joe Jones, Hank Mobley, Johnny Coles, Mickey Roker, Odean Pope, Bootsie Barnes, Bobby Durham, Grover Washington, Don Byron, Dave Douglas, John Zorn, Arto Lindsay, Terry Gibbs and Buddy DeFranco, Sam Rivers, Barry Altschul, the Woody Herman band and the Master Musicians of Jajouka. Since moving to New York in 1985, Caine has recorded 33 albums as a leader, including the Grammy-nominated “Othello Syndrome.” One of his most recent compositions, “The Passion of Octavius Catto,” is a tribute to the murdered Philadelphia civil rights leader; Allegro devoted a two-page story to the piece in our October issue. Caine has also received commissions to compose music for the American Composers Orchestra, the Vienna Volksoper, the BBC Concert Orchestra, Concerto Koln, the Basel Chamber Orchestra, the Arditi Quartet and the Beaux Arts Trio. He was the composer in residence for the Los Angeles Chamber Orchestra for three years and has performed his version of the Diabelli Variations with many of the greatest orchestras. Caine, who served as director of the Venice Biennale in 2003, has received grants from the National Endowment for the Arts, the Pew Foundation and the USA Artist Fellowships.

Caine joined AFM Local 77 when he was a teenager growing up in Philadelphia and joined Local 802 soon after moving to NYC in 1985. A strong supporter of unions and workers, Caine told Allegro that “our union is necessary to protect musicians from being exploited. Today it is sad that there is a movement to weaken unions and their ability to protect workers.”

Local 802’s Bob Pawlo recently sat down with Uri Caine to learn about his journey in music.

Bob Pawlo: What are your first memories of music?

Uri Caine: I remember Friday nights in Philadelphia around the dining room table, singing music and singing Hebrew songs, because my parents were really into teaching my brothers and sisters how to speak Hebrew. I was about seven when I started taking piano lessons. By the time I was in junior high, I was going to clubs. They would let you sit in what was called the peanut section. As long as you ordered Cokes, they would let you come in and listen to the music. I remember listening to Hank Mobley and Pat Martino. I could also hear the Philadelphia Orchestra for two dollars if I stood on line on a Friday afternoon. We got out of school to go to those concerts. When I eventually studied composition with George Rochberg at the University of Pennsylvania, I wanted to write what I thought was contemporary music, and Rochberg told me that I had to start from the beginning, by studying Bach chorales. I also studied with George Crumb, who was a much more reserved, gentle type of teacher. He was a very good pianist and he liked to sight read with me, with both of us playing together.

Bob Pawlo: What were some key elements in your early training?

Uri Caine: One thing is having a certain humility when you’re trying to understand what’s going on in the music. It involves a certain amount of analysis, a certain amount of emotionality, especially if you love what you’re hearing and are trying to understand it and break it down. You look at it from a micro-level. What’s going on here? What’s the piano part doing here? What are the musicians doing? What’s happening rhythmically? What’s happening harmonically? How long is the music? What is the actual sound of the music? And then you should forget about all of this analysis and just do your thing. Here’s an example. I was recently asked to play in Argentina with some tango musicians and write some music for them. At first, I declined. I wasn’t bred with that music in the same way. But they pushed me, and I started to study it. And then at some point I just sat down and wrote without worrying about it. I wrote from my own heart. And musicians can hear when you’re being authentic, even if you’re borrowing from their tradition and not knowing it exactly. If you are honest, you can make it work.

Bob Pawlo: You are a member of a very revered family in the social justice movement. How has that affected your music?

Uri Caine: When I was growing up in Philadelphia, politics was everywhere. We would play for various social causes and we were part of that world. My father was involved in a lot of legal activism for civil liberties. We would talk about it all the time. At one point I asked him “Is being a musician even relevant to all this stuff? Isn’t music just entertainment?” And both he and my brother told me “No, no, no! Do music, because people really need that message too!” Activists need music to inspire and refresh themselves. Music can be a metaphor for freedom. Music can be part of a protest. Music can show people different ways of being in the world. Of course, some people feel that music shouldn’t be connected to politics. I understand that point of view, but I don’t necessarily agree with it because my life has been intertwined with politics. But I understand that when you mix music and politics, you have to do it gracefully so it doesn’t kill the music. The music has to express something.

Bob Pawlo: Who inspires you?

Uri Caine: When Aretha Franklin died, I realized how important her music had been to me, mostly because my mother would play her music over and over again. I still look up to all the people who I listened to when I was young, like Miles Davis and John Coltrane. Musicians like them are true originals. The thing about being an original is that sometimes people don’t recognize you in your lifetime and your music is received as weird or avant-garde. But later it ends up sounding normal and mainstream and part of the culture. Also, I get inspired by people who I play with. On my recent trip to Argentina, I loved playing with the tango musicians.

Bob Pawlo: What would you say to musicians beginning their careers now?

Uri Caine: It sounds like a cliché, but study as hard as you can and show your love for music by taking it really seriously. But then when you’re composing or actually playing music live, let it be joyous. Many music scholars in the academic world love to analyze music and break it down so that they “understand” it. That’s OK, but music is also meant to be something that’s an expression of joy. It’s expression beyond words.