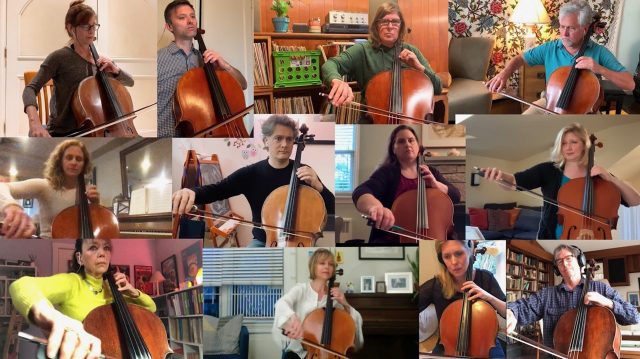 During the NYC quarantine, Local 802 member Katherine Cherbas put together a cello ensemble called Quarancelli. In their first video, the musicians performed Rachmaninoff’s “Vocalise.” Each cellist recorded their part separately at home. The result garnered big attention on YouTube, where it can be seen via this shortcut link: www.bitly.com/quarancelli

Shortly after New York City’s concert halls and theatres were shut down in March, videos started appearing in my Facebook feed featuring quarantined musicians playing together from afar. Like many of you, I’ve always cherished the kaleidoscope of human and musical interactions I experience from week to week in my work as a freelance musician, and I was already missing those interactions as well as the feeling of emotional connection with an audience. Even though I had no experience editing audio or video, I was intrigued by the idea of trying to create my own chamber music video with some friends while we’re all quarantined. With an empty calendar and plenty of YouTube tutorials to learn from, why not give it a try?

Over the course of about 10 days, using some free software and equipment I already had, I assembled a three-minute video that has attracted over 7,000 views in its first few days on YouTube and has been shared hundreds of times on social media. The musicians who played on the video were grateful for the opportunity to hear each other play again, to focus on a goal, and to feel connected. And comments online suggest that an international audience has found some comfort from listening to it. Here’s a basic guide to how we did it:

I started by choosing the repertoire. Rachmaninoff’s “Vocalise” has a wistful, lyrical quality that felt timely to me, and that I knew would work beautifully on the cello. I wanted the video to convey the sense of supportive community that I love about New York City cellists, so I looked online for an arrangement for large cello ensemble and found a version for 12 cellos.

All participants need to be listening to some kind of guide track on headphones while they record. This might be a traditional click track (which you can easily make using free audio software), or it might simply be one of the instrumental or vocal lines from the score. I opted for a hybrid approach: I started by making a click track in Audacity to keep myself honest, and then I recorded myself playing an eighth-note bass line on the cello while I listened to the click track on headphones. The bass line was not part of the score or the final recording; it was something I made up so that my colleagues would hear a steady rhythmic pulse throughout, and I hoped that it would provide a pitch center and a sense of phrasing, both of which would be lacking in a traditional click track.

Ideally, each performer records using three devices simultaneously: one to capture the video (I used my iPad), one to record a separate, higher quality audio file (I used my Zoom H4n Pro), and one through which to play back the guide track (I used my laptop). You could certainly make do with just two devices, simply recording the video on an iPhone or iPad (attach a good quality microphone to it, if you have one available) while listening to the guide track on a computer. A couple of the cellists in our video did that, and I simply had to extract the audio portions of their video files (saving them as .wav files) before I could mix the twelve audio tracks.

Before involving anyone else, I wanted to be sure that I could pull off the technological requirements of this project. So, I made a draft version of the video in which I played all 12 parts myself. I then got in touch with 11 of my cellist friends and described the project and attached my draft video. All eleven of them were game to participate — and we even quickly settled on the group name “Quarancelli” — so we were ready to start recording. I e-mailed each musician a .pdf of their part and a .wav file of my pre-recorded bass line. I instructed them to hit “record” on their video and audio recorders, then “play” on the bass line, and then to play along.

The most time-consuming and challenging part of the process is mixing the audio. There are several excellent audio editing and mixing programs available online for free or with extended free trials: Audacity, MixPad, and Logic Pro, for example. I found abundant, helpful YouTube tutorials for Logic Pro, so that’s the software I chose to use. When my colleagues e-mailed me their audio files, I imported the files into Logic Pro and synchronized the beginning of the piece in all 12 parts: that’s as simple as sliding each track left or right until its first note matches up with the first note of the other parts.

At this point, I could play back the whole piece, but it didn’t sound particularly cohesive, even though each of the cellists played their individual parts beautifully. The unique challenge of this type of project comes from the fact that you’ve got recordings made with a variety of different microphone setups in different acoustical environments. In addition, without being able to hear each other, the individual players can’t make the natural adjustments they would make in a traditional chamber music setting, to blend their articulations, dynamics and tone colors. Mairi Dorman-Phaneuf, who had recorded one of the cello parts for this project, had some prior experience mixing audio in Logic. I called her for advice, and she encouraged me to focus my attention on balance. With a singular goal of making sure the listener’s ear could follow the melody from beginning to end, I started to make sense of the audio. Over the next couple of days, I gradually tweaked the balance of each bar in Logic, making sure the melody was prioritized and that unisons among multiple players were balanced to imitate how they would sound in live performance. When my own ears grew numb to detail, I sent drafts to Mairi for her feedback.

Once I was happy with the audio, I saved it as one new file. Then I was ready to move on to the final stage of the project: assembling the video. Again, there is great, free software available and an abundance of YouTube tutorials to help. I had already downloaded DaVinci Resolve and used it to make the draft video in which I played all the parts. But when it came time to make the final video, my friend Mairi generously volunteered: she already had several years of experience using Adobe Premier Pro to edit videos and she had been wanting to learn how to make a multi-screen video. I sent her the 12 individual video files that had been sent to me. With the help of Google and YouTube tutorials, she figured out how to synchronize them and lay them out on the screen in a way that is pleasing to the eye. She then swapped in the audio file that I had finished mixing, and we had ourselves a video!

Until it’s safe to play music live with others again, projects like this one allow us to feel some degree of connection with our colleagues and our audiences. And if I could figure out how to do it with free online resources and a little help from my friends, I know you can too!

Before the quarantine, cellist Katherine Cherbas, a member of Local 802 since 1999, divided her time among several Broadway shows, City Center’s Encores! Orchestra, the Radio City Christmas Spectacular Orchestra, and a number of other freelance ensembles.