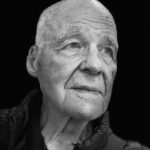 Sivert “Sy” Johnson, who passed away peacefully in New York City on July 26, 2022, was born on April 15, 1930, in New Haven, Connecticut. According to the demographers, this made him a member of the so-called “Silent Generation.” Thankfully, Sy Johnson was anything but, for he was destined to fill the air with a lifetime of unforgettable music.

Sy Johnson, who first joined Local 802 in 1960, achieved widespread acclaim as a world-class jazz composer, arranger, pianist, and singer. Throughout his career, Sy carried a 35mm Leica camera with him, often on the bandstand, recording a storied career in jazz. Many of his photographs were collected and published in his 2014 book, Jazz: Personal Encounters.

Additionally, Sy was a gifted writer, beloved teacher, and accomplished interviewer — his legendary 1974 conversation with Miles Davis was published by the Smithsonian in the “Miles Davis Reader.”

Sy’s renowned work with Charles Mingus spanned the 1960s and 1970s. Their iconic recording collaborations began with “Let My Children Hear Music,” and would eventually see Sy nominated for a Guggenheim Award. After Mingus’ death in 1979, Sy worked equally productively with his widow, Sue Mingus, for several years. Here Sy harnessed his abundant talent in groundbreaking arrangements for the Mingus Big Band, Mingus Orchestra, and Mingus Dynasty. (Click here for a tribute to Sy Johnson published on the Charles Mingus website.)

Yet for all of Sy’s professional success, it is the boundless love he left behind that marks the true measure of the man. Above all else, it was his marriage to Lois Mirviss, which spanned nearly half a century, that brought him the most joy. Sy will be profoundly missed by his sister Elizabeth Keppel, brother-in-law Richard Keppel, nephew Philip Johnson and his wife Karen Johnson, nephew Peter Johnson, niece Pamela Hores, and all of their wonderful children.

“Think where man’s glory most begins and ends. And say my glory was I had such friends.” — William Butler Yeats

For all of us who had the immense privilege of knowing him, Sy Johnson’s incomparable friendship will remain in our hearts forever.