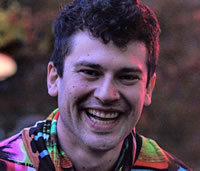 Markowitz spoke about how artists can use social media to create buzz, promote engagements and maintain a sustainable digital presence. His knowledge of the subject is comprehensive, and as the sole panelist on the stage, he captivated an audience eager for information on how to use free social media platforms to their greatest advantage. Markowitz told the story of how he had approached Wayne Shorter backstage in 2015 to convince him that his Facebook coverage could be better and more up to date. Shorter agreed to hire him after one meeting.

“I had breakfast with Wayne and I asked if he would be interested in communicating with his audience, so we filmed him, right there at the breakfast table,” said Markowitz. “Wayne just started talking philosophical, beautiful stuff about how to overcome your obstacles. Six thousand people tuned in during those six minutes and it’s since been seen over 100,000 times.”

Markowitz stressed that there are various ways to use social media to make a splash. “There are three basic promotional levels, as I see it,” said Markowitz. “The basic level – Level 1 – is to do things such as tell people when you’re playing, highlight interesting guest appearances with your band, tell your fans when you’re releasing a new recording, and post music. Engage with people. Posting one song per day is acceptable.” 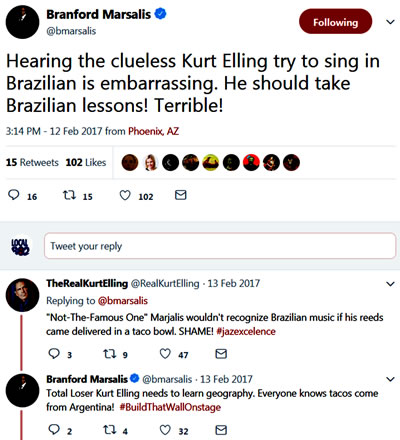 Above, a “fake Twitter war” between Brandford Marsalis and Kurt Elling is a form of promotion on social media that Jesse Markowitz calls “dramatic irony.”

Level 2, as Markowitz described it, is something that he referred to as “dramatic irony” and used the example of a fake Twitter war between Branford Marsalis and Kurt Elling in which the two musicians engaged in a cyber version of “the dozens,” insulting one another to the horror (and perhaps delight) of their fans. The stunt pulled in thousands of replies and re-tweets, and both performers benefited from what eventually became obvious to all was a harmless prank.

Level 3, said Markowitz, is characterized by an almost subversive use of social media, where, for example, you might go strongly against the expectation of your fans as a means to “disrupt.” The example provided was when the popular restaurant Chipotle pretended to have a Twitter hack in which it appeared as if two Chipotle patrons, in a classic “wires crossed” scenario, had inadvertently hacked into the restaurant’s feed with text-like tweets that read, “Honey, please don’t frgt 2 pick up xtra guac,” and “How do ya actually pronounce cilantro, anyway, hun?” Chipotle gained 4,000 followers in one day, and Markowitz referred to this as an example of avant-garde social media promotion.

The point, said Markowitz, is to capture people’s attention but also to be relatable. “There’s a reason why dog and cat and parakeet videos go viral,” said Markowitz. “Everybody loves animals, kids, friendships, family. Things that are personal.”

He emphasized the importance of finding common ground with people who are interested in your music – and that you portray yourself as a human being, not just a musician.

“The stuff I do that goes the farthest when it’s less to do with music and more to do with who my artists are,” he said.

Finally, when asked about the state of jazz today, the young man who routinely connects with more than 250,000 Facebook users a week said this: “Jazz is as popular today as it ever was. Clubs might be shrinking in New York, but we are able to harness the love of jazz from people all over the world in a way that was unthinkable even 20 years ago. Don’t believe the hype. Jazz is more than healthy.”