The Musicians’ Voice is an open forum for discussion about the state of union affairs. The letters here do not necessarily express the views of Local 802. E-mail letters to Allegro editor Mikael Elsila or write to Allegro, Local 802, 322 West 48th Street, New York, NY 10036. Letters must be no more than 300 words. 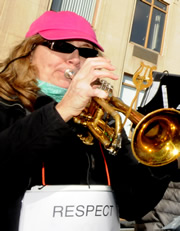 When Local 802 member and jazz musician Joyce Toth founded Resistance Band NYC, in response to recent social and political issues, a longstanding question was answered for me: what is the future of protest music? It also inspired me to create a Texas branch of Resistance Band, which took part at the March for Our Lives rally in El Paso this March.

Though I was raised by a folk musician who specialized in protest songs, I took a different path and became a classical musician, and I have always struggled with the chasm between these two worlds. Traditional protest musicians are often self-taught without formal training. Songbooks often include only words and chords, and melodies are passed on through oral tradition. Protest music is concerned with getting across a message and having the most possible participants, not with a perfect performance.

Yet the new generation of marchers hasn’t grown up singing protest songs, and aren’t likely to join in on “If I had a Hammer” or “Where Have all the Flowers Gone.” The repertoire is changing, and the tradition of passing along songs orally is becoming less common.

Resistance Band NYC shows the way forward. Trained to read and improvise, thriving on the unpredictable and the unknown, jazz musicians have stepped into the breach. Really, they have been there all along. Forged in the oppression of African-Americans, protest is the default mode of jazz. Consider the following: Charles Mingus’s “Foibles of Faubus,” Billie Holiday’s performances of “Strange Fruit,” Jerry Dodgion on Judy Collin’s 1965 recording of “It Isn’t Nice,” and the Kit McClure band refusing to cross the picket line at Tavern on the Green, playing outside instead. We thank Local 802’s jazz musicians for leading the way. 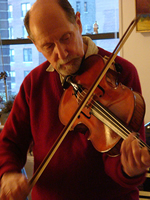 Michael Tree, whose obituary appeared here in the May issue, was both a humanitarian and one of the great viola players of all time. Rarely in music have I experienced a kinder and more thoughtful person. He was a gentle soul and yet his viola could roar with the sleekest of the pack. Michael’s early violin recordings are very beautiful, but it was really not until he picked up the viola in his early Marlborough years that his true voice emerged. I value the real players whose voices are at once identifiable. It is important to copy others – but it is essential to find your true voice. Few can do this. Michael Tree played with a unique and rich sound. He did not skim over the surface as do violinists who think viola playing comes so effortlessly. Michael was a very thoughtful man who cared about music deeply. He was sensitive to other players and to his wonderful students at the Curtis Institute. And I have always been a great fan of the legendary Guarneri String Quartet. Each player etched out phrases so beautifully. These were four tremendous players who focused in to do justice to some of the greatest creations ever penned. On a recent occasion, Michael surprised me with a lovely letter upon hearing a recording I had made. I was very touched – few artists might have taken the time to actually pen such a note to a younger violist. Michael Tree was undoubtedly one of the finest quartet viola players I have ever heard and he was a magnificent chamber musician. He was beloved by his students and colleagues around the world.