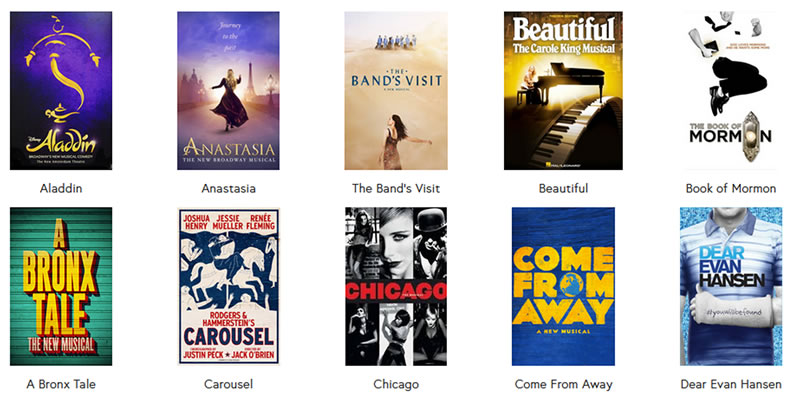 BROADWAY MUSICIANS SHARE THEIR TALENTS WITH THE PUBLIC: Above, a screenshot from www.BroadwayMusicians.com, a site maintained by the Local 802 Broadway Theatre Committee, which lists the names of each musician playing for each show. For more info, send an e-mail to BroadwayMusiciansWebsite@gmail.com

Who actually attends a Broadway show? That’s the question that the Broadway League attempts to answer each year when it releases its annual demographics report. The latest report finds that  more New Yorkers attended a Broadway show than in any season since 1998-1999 and the number of theatregoers under 18 years old was the highest since the League’s analysis began.

The report compares current Broadway habits in New York City to previous seasons and aids in predicting trends for the future. This report is the 20th publication in a longitudinal study that tracks the trends and changes of the Broadway audiences over time.

To gather its data, the League surveyed 48 different productions at 112 individual performance times. Shows were selected on a quarterly basis to represent what Broadway was offering that season (i.e., a proportionate number of musicals versus straight plays, revivals versus original works, and new productions versus long-running shows). Questionnaires were distributed at multiple performances per show to account for variances in the weekday, weekend, evening and matinee audiences. Completed questionnaires were tabulated and weighted based upon the actual paid attendance for each show. In total, 21,600 questionnaires were distributed and 11,906 were returned, representing a 55 percent rate of return.

Each year brings fluctuations to the make-up of the audiences due to a variety of reasons such as content, weather, the economy, and changing competition for leisure activities. Therefore, this longitudinal analysis is important to track the trends and changes of the Broadway audiences over time.

For the 2016-2017 season, Broadway shows yielded $1.45 billion in grosses. Total attendances reached 13.3 million. Attendance per playing week was 8,400, a 4 percent increase from the 2015-16 attendance per playing week of 8,081. Theatregoers came from near and far and represented a variety of ages and ethnic backgrounds, and showed different purchasing habits and theatregoing preferences.

The New York City audience accounted for 22 percent of theatregoers (or 2.85 million admissions), the highest percentage in 15 years. Another 18 percent came from surrounding suburbs.

Attendance by theatregoers under 18 years old was 1.65 million. Twenty-five percent of respondents were under 25 years old. Moreover, there were another 1.62 million admissions by theatregoers aged 18 to 24.

Approximately half of respondents said they purchased their tickets online. American theatregoers were more likely than others to use the internet to purchase tickets, whereas those who reside outside of the U.S. were more likely to make the purchase in person.

Theatregoers reported personal recommendation as the most influential factor when it came to selecting a show to see. Other factors included the music, having seen the movie, internet listings and having seen the show before.

The average reported date of ticket purchase for a Broadway show was 42 days before the performance.

The report is available online at www.broadwayleague.com/research/order-research-reports.