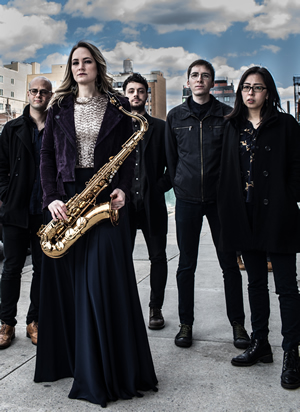 The Roxy Coss Quintet is the winner of Local 802’s inaugural Emerging Artists Project grant. This groundbreaking four-year award was designed to support emerging ensembles in New York City as well as further efforts to ensure that all professional musicians can afford to live, work and raise a family in New York.

“Our ensemble is thrilled that we’ve been selected,” said saxophonist and bandleader Roxy Coss, a member of Local 802 since 2015.

Coss added, “Musicians across New York City know how difficult it can be for an emerging ensemble to get a firm foothold in the industry and make a living, but this grant is going to go a long way towards helping us thrive. The support and structure of the Emerging Artists Project grant is providing the framework we need to progress and mature as an ensemble, and it’s an honor to be a part of an effort to highlight fair payment and treatment in the arts as well.”

Local 802 President Tino Gagliardi said that the Roxy Coss Quintet “is the type of group that we are working to find innovative and effective ways to support.”

Gagliardi added, “The response among the music community to this program has been overwhelmingly positive because it’s been designed to support musicians and ensembles so that they can make a fair living. At the end of the day, we believe this program will help in our overall efforts to raise the wage floor for all musicians. The Roxy Coss Quintet is already on its way to fame and success, and we’re happy to be helping them take the next step.”

The competition was open to bands and ensembles of three or more musicians in any genre with at least a one-year history of performances. The Roxy Coss Quintet will receive $10,000 per year for four years to help pay fair wages, get access to health care and pension benefits, receive business support and mentorship, and gain access to the union’s rehearsal space and other resources. The group will also receive discounted rehearsal space and recording studio access at the DiMenna Center for Classical Music, which is the rehearsal, recording and performance facility owned and operated by Orchestra of St. Luke’s. The DiMenna Center serves more than 500 ensembles and more than 30,000 musicians each year, fulfilling its dedication to providing service to New York City’s musicians.

“Orchestra of St. Luke’s, which is made up of Local 802 members, wants to congratulate the Roxy Coss Quintet,” said James Roe, president and executive director of Orchestra of St. Luke’s. “We look forward to working with the band and seeing them at the DiMenna Center, which we established in part to provide emerging artists and ensembles the opportunity to rehearse, record and perform in affordable, state-of-the-art spaces. This partnership with Local 802 is an exciting one, as we are all eager to help emerging ensembles like the Roxy Coss Quintet take the next steps in their careers.”

To apply for the grant, ensembles submitted examples of their performances as well as a business plan. Applications were reviewed by independent jurors drawn from the New York professional music community who had expertise in each applicant’s style of music, as well as by the leadership of the union. Membership in Local 802 was not required to apply, although the winning ensemble was required to sign a collective bargaining agreement with the union.

The Roxy Coss Quintet is a New York-based modern jazz ensemble, which includes guitarist Alex Wintz, pianist Miki Yamanaka, bassist Rick Rosato and drummer Jimmy Macbride. The band primarily performs Coss’ original compositions along with her arrangements of tunes from the modern jazz, pop and standards songbooks. The quintet has headlined at the Newport, Earshot and Ballard jazz festivals, and also performed at Jazz at Lincoln Center’s Appel Room for the 2016 ASCAP Foundation Awards. Most recently, it was featured at the 2017 Midwest Clinic’s “Music & Arts” reception. The band has performed at many major venues in NYC including the Jazz Standard, 55 Bar, Smalls, Zinc Bar and Cornelia Street Underground. The band has also toured nationally. 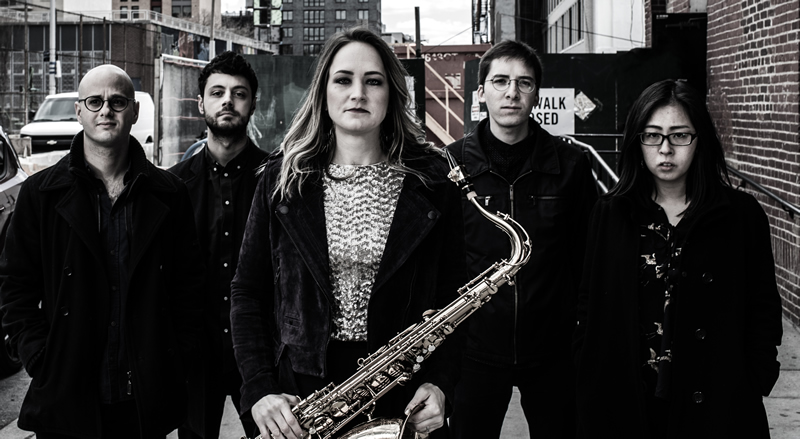 Bandleader, composer, arranger, educator and activist Roxy Coss has become one of the most unique and innovative saxophonists on the scene. Winner of a 2016 ASCAP Herb Alpert Young Jazz Composer Award, she’s been listed in the annual Downbeat critics’ poll as a rising star on soprano sax for the past four years in a row. Downbeat also called her “an exceptional young talent.” Roxy graduated magna cum laude in 2008 from William Paterson University with a B.Mus. in jazz studies and performance. In 2011, she was chosen to participate in Betty Carter’s Jazz Ahead residency and workshop at the Kennedy Center, and also at the acclaimed Steans Institute Jazz Program at the Ravinia Festival. Coss is also the founder and director of Women In Jazz Organization, a collective of professional jazz musicians who identify as women, gender neutral or non-binary.

Young guitarist Alex Wintz is quickly gaining a name in the international jazz community. His talent and embrace of contemporary influences, melded with a deep gratitude to the traditions of the past, has garnered him numerous accolades and acclaim from music lovers across the globe. Wintz is also a frequent collaborator with Etienne Charles, Ben Williams and Sound Effect, Peter and Will Anderson, and Nick Finzer. Throughout his career, he has performed at leading jazz venues and festivals around the world, including the Newport, Monterey, Montreux and Montreal festivals. Last year, Wintz released “LifeCycle,” his debut recording on Etienne Charles’ Culture Shock imprint. The album, both challenging and accessible, has garnered critical acclaim from Downbeat Magazine (which gave it 3.5 stars), All About Jazz, and the New York Jazz Record.

Miki Yamanaka is a New York-based pianist, organist amd composer from Kobe, Japan. She moved to New York City in 2012 and studied piano with Jason Lindner, Jeb Patton and Fred Hersch. She also studied organ with Sam Yahel and Larry Goldings. In 2015 she was one of three pianists selected to participate in Betty Carter’s Jazz Ahead residency. She recently earned her master’s degree in music from Queens College, where she received  the Sir Roland Hanna Award. Yamanaka has appeared in concert with many notable musicians including Steve Nelson, Seamus Blake, Jerry Dodgion, Victor Lewis, Rich Perry, Antonio Hart and Peter Bernstein. She holds weekly residencies at Smalls and Mezzrow jazz clubs in NYC, hosted a week-long tribute to Horace Silver in 2016, and presented her own music last year at Dizzy’s Club Coca Cola. Besides working in Roxy Coss’ group, she is also the current pianist in the Philip Harper Quintet. Yamanaka recorded an EP called “Songs Without Lyrics” in 2012, and has just recorded a new album with Steve Nelson, Orlando le Fleming, and Bill Stewart, called “Miki,” which will be released later this year.

Originally from Montreal, Rick Rosato moved to New York City in 2007 to study at the New School. He quickly became one of the most in-demand jazz bassists and is maintaining an international performing, recording and teaching schedule. In 2010, he led a three-month-long artist series at the Upstairs Jazz Club in Montreal, where he formed several groups featuring some of today’s most influential voices in jazz, including the co-led trio Stranahan/Zaleski/Rosato. In 2014, Rosato competed at the TD Jazz Awards at the Montreal International Jazz Festival with his own trio and won the Galaxie Jazz Award for best composition. He tours internationally and records with his own group and others, including Gilad Hekselman, Ben Van Gelder, David Kikoski and Will Vinson. Rick has also performed alongside Billy Hart, Peter Bernstein, Mark Turner, Dayna Stephens, Chris Potter, Aaron Parks, Bill Stewart, Marcus Gilmore, Jeff Ballard, Ari Hoenig, Mike Moreno, Lage Lund, Charles Altura and many more. In addition to private teaching, Rosato has led workshops throughout Europe and was a featured artist and teacher at the Thai International Jazz Conference in 2014.

Jimmy Macbride is a drummer and composer based in New York City. He has performed with a wide variety of artists including Herbie Hancock, Terence Blanchard, Wynton Marsalis, Kenny Barron, Jimmy Greene and Adam Rogers. Coming from an artistic family (his father is a composer and mother is a visual artist), Macbride began playing drums at age three and gravitated toward jazz at an equally young age. Jimmy is a recent graduate of Juilliard, where he studied privately with Carl Allen, Billy Drummond and Kenny Washington. He is a regular performer throughout New York City, performing at Dizzy’s Club Coca-Cola, Smalls, the Jazz Gallery and the Blue Note, among others. Macbride has also appeared at some of the world’s most famous venues, including the Monterey, North Sea and Newport festivals, among others. He performs regularly with different groups including Nir Felder, Samora Pinderhughes’ Transformations Suite, Lucas Pino’s Nonet and Nick Finzer’s group. In addition, he can be seen playing with many of New York’s most creative and forward-thinking artists, including Lage Lund, Ben Street, Kevin Hays, Fabian Almazan, Matt Brewer, Michael Rodriguez and Dayna Stephens. He is an active recording artist, appearing on over 20 albums to date.