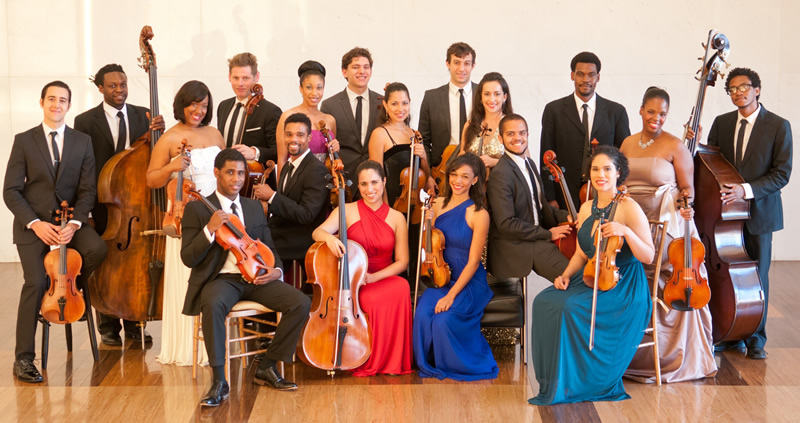 Composed of 18 of the nation’s top black and Latinx classical soloists, the Sphinx Virtuosi is one of the nation’s most dynamic professional chamber orchestras. How can other classical ensembles across the country increase their diversity? That question is being tackled by a new initiative called the National Alliance for Audition Support.
Photo: Kevin Kennedy

Three national organizations – the Sphinx Organization, New World Symphony and the League of American Orchestras – have partnered to create the National Alliance for Audition Support, a field-wide initiative with the long-term goal of increasing diversity in American orchestras. Supported by a four-year, $1.8 million grant from the Andrew W. Mellon Foundation, along with additional financial and programmatic contributions from America’s orchestras, the Alliance will offer a holistic and personalized array of support to black and Latinx musicians to develop their audition skills, increase their participation in auditions, and ultimately increase their representation in orchestras.

“I’m grateful that Sphinx, New World Symphony, and the League are collaborating to offer this special initiative,” said Local 802 member Anthony McGill, principal clarinetist of the New York Philharmonic and a member of the League’s Board of Directors. “We need a national, comprehensive approach to overcoming the barriers that face black and Latinx orchestral musicians. I know that these are the kinds of resources that can make a real difference.”

The Sphinx Organization is a Detroit-based, national organization dedicated to transforming lives through the power of diversity in the arts. Sphinx programs reach more than 100,000 students, as well as live and broadcast audiences of more than two million annually. The organization works to create positive change in the arts field and in communities across the country through a variety of programs. Sphinx is the lead program administrator and exercises fiscal oversight for the National Alliance for Audition Support.

“This is a critical time for all of us to act with renewed commitment and drive to help our orchestras to be more reflective of their communities and to represent perspectives and talents from black and Latinx musicians,” said Sphinx president and artistic director Afa S. Dworkin. “We are honored to join forces with key industry leaders, humbled to receive and incorporate extensive insight directly from artists, and incredibly grateful to the Andrew W. Mellon Foundation for prioritizing this vital work.”

The customized array of support to be offered through the National Alliance for Audition Support will include:

The New World Symphony, America’s Orchestral Academy, will provide expertise and access to its renowned workshops, artist development resources, and online assets, as well as help recruit musicians for the program.

“New World Symphony envisions a strong and secure future for classical music,” said New World Symphony President Howard Herring. “We believe that is possible only if the orchestras of this country are representative of their communities.”

The League of American Orchestras will convene and mobilize its 700-member orchestras, which will provide funding, mentoring, and guidance for the musicians. The League will also serve as the communications lead for the project and collect and disseminate research and data.

“This unprecedented collective action on the part of America’s orchestras addresses some of the main barriers to advancing diversity, equity, and inclusion in orchestras,” said Jesse Rosen, president and CEO of the League of American Orchestras. “The unique and coordinated network of support is informed by research and extensive discussions with many black and Latinx musicians as well as many other individuals in orchestras and higher education. We are especially grateful to the AFM, the International Conference of Symphony and Opera Musicians, and the Regional Orchestra Players Association for their participation and support.”

The Alliance will be advised by an Artists’ Council of black and Latinx orchestral musicians, orchestra administrators, and representatives from higher education. National Alliance for Audition Support musicians participating in the audition training programs or receiving financial support for audition activities will be selected through an open competitive process. The first National Alliance for Audition Support Audition Intensive takes place June 6 to 8, hosted by the New World Symphony in Miami. The Sphinx Orchestral Partners Auditions take place in Detroit during the annual Sphinx Connect conference in February 2019. The mentoring program is in development. Learn more at www.AuditionAlliance.org.