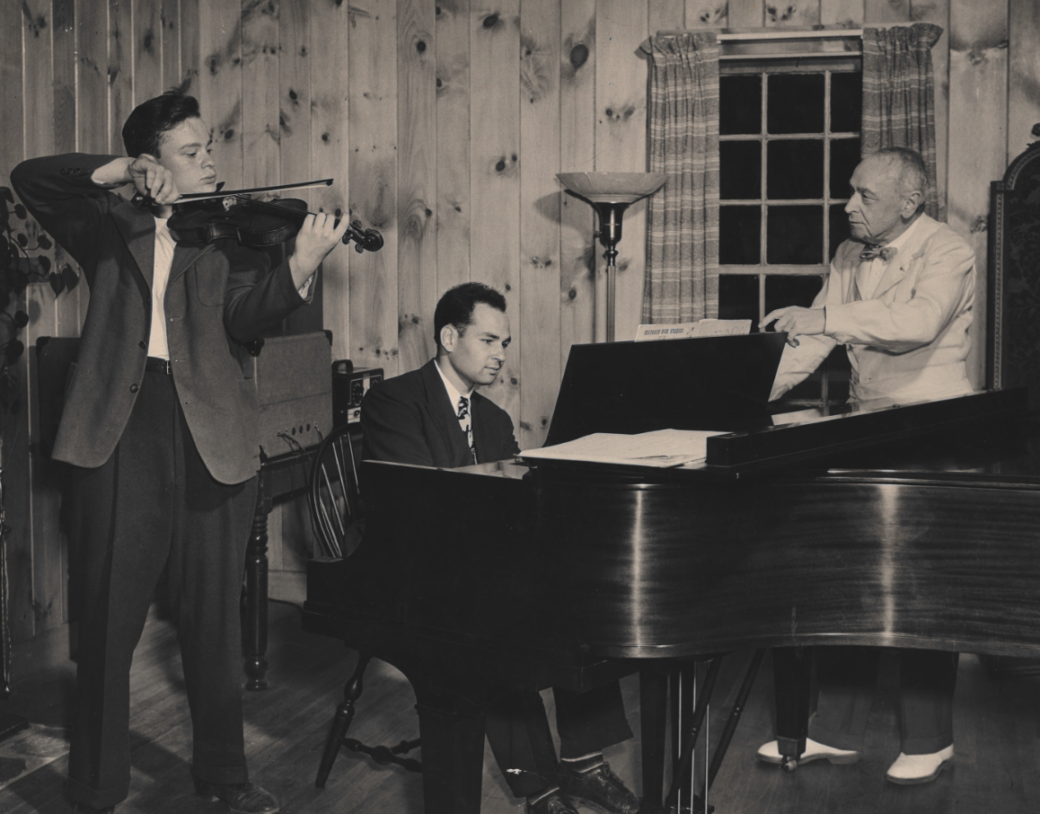 Violinist Kenneth Gordon, a member of Local 802 since 1948, was recognized as a shining star early in his life. He made his professional solo debut at the age of 12 with the NBC Symphony under the direction of Leopold Stokowski, and the following year he performed the Tchaikovsky concerto with the New York Philharmonic at a Young People’s Concert under Rudolph Ganz. At age 15, he played a recital at Town Hall, and by the time he was 31, he had won chairs first in the MET Orchestra and next in the New York Philharmonic. Along the way, he studied with Mishel Piastro, Jacques Thibaud, Yehudi Menuhin and Nadia Boulanger, and found time to record for TV, film and jingles. Mr. Gordon will be one of the esteemed performers at the Local 802 Senior Concert Orchestra’s annual concert at Carnegie Hall. The ensemble is composed of the most experienced professionals in New York City, many of them former musicians with the New York Philharmonic, MET Orchestra, Broadway and the recording studios. This nonprofit orchestra was organized in 1966 by Local 802 and provides special services and programs for its members as well as free concerts to the public. Bob Pawlo recently sat down with Ken Gordon to hear about his life in music.

Bob Pawlo: I want to start this interview just by asking you about some of the famous musicians you’ve played with or learned from. Let’s start with the time you played a concert with the NBC Symphony at age 12.

Ken Gordon: That was under Stokowski. He was terrific…very good to me. I played Lalo’s “Symphonie Espagnole.” After that concert, there was a reception, and sitting next to me was the great violinist and composer Fritz Kreisler. Someone said to him, “Fritz, why don’t you play the piano for the boy? He has his violin here.” Fritz got up from the table during lunch, went to the piano, and I took out my violin, and he accompanied me. I remember that he didn’t play the music as written. He improvised, and it was really much better.

Bob Pawlo: My God! That was a great day! Now tell us about your lessons with Nadia Boulanger.

Ken Gordon: Oh, she was a taskmaster. Oh, you had to know your stuff! She emphasized theory, and she had her students write music, which I tried. She stressed the importance of scales and arpeggios, which are the fundamentals of playing any instrument, and are what I impress upon my students even today.

Bob Pawlo: All of this is happening while you’re still a teenager. Amazing! What about your lessons with Yehudi Menuhin?

Ken Gordon: One time, I walked in for a class with him, and he’s standing on his head! He was interested in yoga. From him I learned intonation and interpretation, and how to listen to what I play. The sound and the phrasing are more important than the technicalities. He had a wonderful sound. 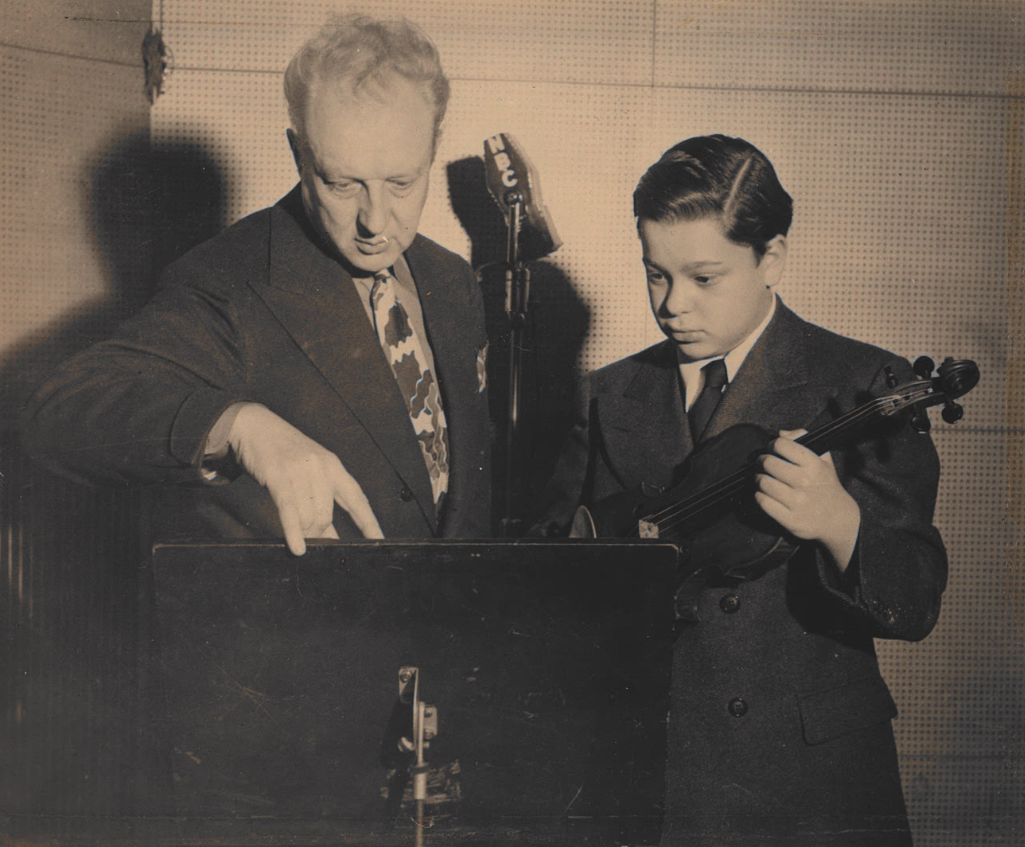 Bob Pawlo: What was your experience playing in the Army?

Ken Gordon: I was drafted in 1951 and did 16 weeks of basic training at Fort Dix. During that time, I met fellow musician Seymore Bernstein, who was there at the same time. The two of us got together and starting playing music when we could. But then we got our orders to go to Korea…as soldiers! So we decided to see if we could serve as musicians. We pulled some strings through colonels and a few generals. We eventually got stationed in Taegu, South Korea, and ended up playing at least 400 concerts for the troops, sometimes on the front lines! It was very heartening to play at hospitals for the wounded, and I played for the U.S. commanding officer, General James Van Fleet. I also played for Syngman Rhee, the president of South Korea. I remember that most of the requests we got were for the songs “Hot Canary” and “Fiddle Faddle.” When we played “Ave Maria,” there was never a dry eye. I remember after one concert on the front lines, I heard applause coming from the other side of this mountain, and it was the Chinese applauding us! Wow…how close can you get? I mean, they could have lobbed a shell over at us…I wouldn’t be here talking to you!

Bob Pawlo: Well, if you played a wrong note, they might have!

Ken Gordon: Ah, we played at least a couple of wrong notes. But they didn’t care.

Bob Pawlo: Thank you for your service! After Korea, what happened?

Ken Gordon: After a bunch of extremely eclectic and wonderful gigs, I decided to try to get a steady job. I was lucky enough to win an audition at the Metropolitan Opera. In those days, we would rehearse every Monday to Friday, and play an opera every evening from Monday through Saturday, and a matinee on Saturday afternoon. The money was terrific, but on my one day off, I just lay in bed. I couldn’t move. I said, this is good, but I gotta get out of here. So in 1961, I auditioned for the New York Philharmonic under Leonard Bernstein. A few years later, Pierre Boulez was conductor and asked me to serve as assistant concertmaster. I sat behind Glenn Dicterow. 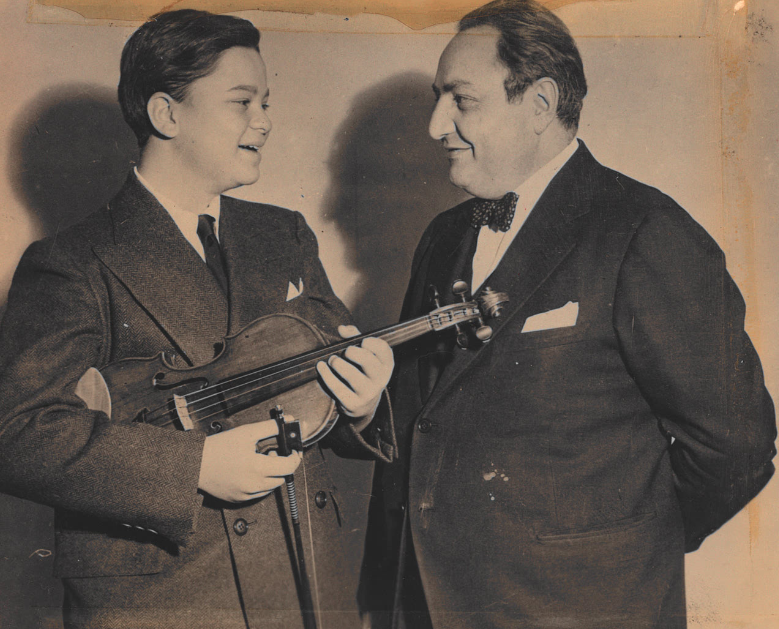 Bob Pawlo: Could you tell us about the first day at Philharmonic Hall?

Ken Gordon: George Szell conducted us in one of the Beethoven symphonies. In one of our first rehearsals, I remember the chords ringing out: BAM! BAM! BAM! He stopped the orchestra, and somebody asked him, “How do you like the hall?” He said, “Tear it down!” Szell didn’t mince words. It turns out that the builders had made the stage out of cement instead of wood, and the acoustics were horrible. They eventually had to re-do the whole stage.

Bob Pawlo: What are some of your favorite memories playing with the Philharmonic?

Ken Gordon: I think one of the great highlights is being associated with Bernstein, who was wonderful. He would call you by your first name and he wanted to be called Lenny. He brought a lot of excitement to the music, and he knew it. As soon as he walked on stage, you felt that you had to play your best. Very few conductors can do that. I’ll tell you another conductor who we enjoyed: Kurt Masur. We didn’t like him as a person. He used to ball out people during concerts. Being with him was not the greatest thing personally, but he produced some of the greatest works. He was a great musician.

Bob Pawlo: What about the time you toured Russia with Bernstein?

Ken Gordon: We did the Shostakovich Fifth Symphony in Moscow. The Great Hall was beautiful, and Shostakovich himself was there at the performance!

Bob Pawlo: I have the record! Did you meet Shostakovich?

Ken Gordon: Oh yeah. There was a party afterwards. I’ll tell you a secret. I hate caviar! We were plied with caviar. Every dinner with caviar. They gave us caviar to take home. I didn’t know what to do with it. I gave it to friends.

Bob Pawlo: Did the audience appreciate you in Moscow?

Ken Gordon: Oh, they loved Lenny. We were like rock stars! It’s not like it is today. We’d get to a concert and the photographers would swarm us. We got police escort from the airport to the hotel. This happened all over.

Bob Pawlo: For our readers, in the 1960s, the two most recognized musicians or groups in the world were Leonard Bernstein and the Beatles.

Bob Pawlo: How has being in music changed over the years?

Ken Gordon: Classical music is not appreciated like it used to be. First of all, when I was in public school, they taught music. We had a music class. Now, they don’t even discuss music in schools anymore.

Ken Gordon: I bet you if you asked many students who Arturo Toscanini is…they’ll say, “Who? Does he own an Italian restaurant?” Or Stokowski or Heifetz. What are you going to do?

Bob Pawlo: What advice would you have for string players who would be starting out their careers now?

Ken Gordon: It’s the greatest thing you could do. You can accomplish anything. But the openings today are not like they used to be. Many gigs use synthesizers to cover string parts. It’s a whole different environment. But there’s no other life like being a musician. It’s a wonderful thing.

Bob Pawlo: We have to end this interview in a moment, but tell us about when you met Pablo Casals.

Ken Gordon: Once, in Europe, I managed to get a lesson with Casals. I showed up at 11 a.m. and was told to wait. And I’m waiting and waiting. This was my moment to meet the great Pablo Casals, the epitome of strings players. The door opens. I see him coming in closer and closer, and I wait for him to speak his words of wisdom. He looks at me and intones, “How are you going to pay? In dollars or travelers checks?”

Bob Pawlo: That’s one for the ages.

Ken Gordon: He was great. I went through the Bach unaccompanied sonatas with him. It was a memorable experience.

Bob Pawlo: In closing, what would you say to your fellow members of the union?

Ken Gordon: Keep up your membership in Local 802! The union has done a lot for musicians and will continue to do more. Both Local 802 and the AFM are great. 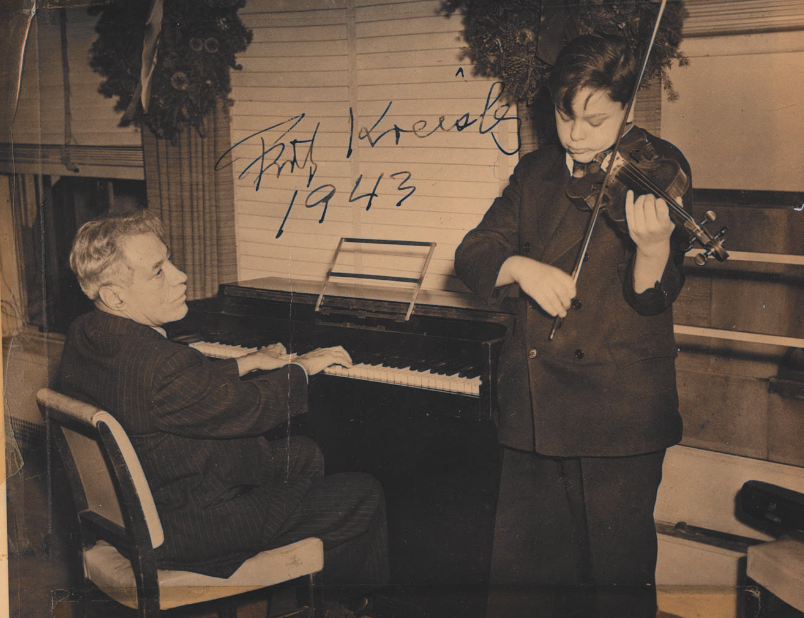 Ken Gordon with composer and violinist Fritz Kreisler, sitting at the piano