For those who celebrate it, Easter is a happy time filled with egg hunts, parades and the consumption of various confections. For many years, one of the staple treats found in most Easter baskets has been a chick-shaped marshmallow candy known as “Peeps.” These candies are manufactured in a single plant located in Bethlehem, Pennsylvania owned by Just Born Candy Quality Confections, which also manufacturers “Mike and Ike” and “Hot Tamales” candies. It is estimated that Just Born makes over one billion Peeps each year!

Just Born is a 95-year-old company that has been run by several generations of the same family since its inception. Its employees likewise have worked there for generations. Workers at the company are represented by the bakers’ union (BCTGM Local 6). It is a close-knit operation, so this is hardly a scenario where one would expect to find a heated labor controversy. However, a recent drama behind the scenes went so far as to threaten an industry-wide, multi-employer pension fund that provides pensions to over ten million workers. The story behind this labor conflict sheds light on the overall crisis that has befallen many multi-employer pension plans in this country – and how labor unions facing this crisis are attempting to survive it.

The dispute arose when the fund that provides defined benefit pensions to the confection industry was placed into “critical status” by the actuaries. As a result of the designation, the fund developed a rehabilitation plan that mandated increased pension contributions and employer surcharges. (Such a rehabilitation plan is a mandatory obligation under pension law.)

Nevertheless, despite the fact that Just Born was a participant in the plan, it refused to sign the rehabilitation plan or pay the enhanced contributions. Under the Multi-employer Pension Plan Amendments Act of 1980, an employer that fails to comply with an implemented rehabilitation plan is required to pay statutorily imposed surcharges.

The result was that the pension fund successfully sued Just Born for unpaid contributions and surcharges in excess of $300,000. 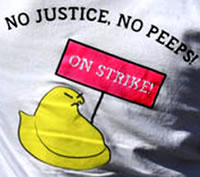 However, the story doesn’t end there.  During its next negotiations with the union, Just Born proposed that newly hired employees should no longer be covered by the pension plan, but instead become participants in a 401K plan. This proposal prompted the union to call a strike, and 400 workers walked off the job. During the strike, workers donned shirts stating “No Justice, No Peeps.” The strike got nasty, and many workers broke ranks, crossed the picket line and returned to work. The union called off the strike, but various legal challenges ensued. The company sued the union for allegedly violating the contract’s no-strike clause, even though the contract was expired. (The company lost, but is still appealing.) On the other side, the union filed an Unfair Labor Practice charge against the company due to its use of scabs to break the strike. (The company won this one.)

The crux of the entire dispute was the pension. The union knew that if Just Born withdrew newly-hired workers from the pension fund, it would likely create a cascade effect and prompt other employers to withdraw as well, potentially leading to the demise of the fund. The union’s president, Hank McKay, put it succinctly: “They’re trying to take from those who gave them so much.”

It bears mentioning that this pension plan was already compromised once in 2011 when Hostess filed for bankruptcy protection and withdrew from the fund. At the time of its withdrawal, Hostess was one of the largest contributors to the fund – it accounted for 24 percent of all contributions made. Hostesses’ withdrawal was likely a contributing factor to the fund entering critical status.

Fortunately, there is a happy ending to this story – for the moment. A federal appeals court has determined that if Just Born goes ahead with its proposal to withdraw new workers from the pension fund, it would have to pay $60 million to the fund in withdrawal liability. This ruling confirms that any employer unilaterally attempting to bar new employees from participating in an established pension plan will pay a huge price.

It appears that it’s simply too costly for the company to withdraw from the fund. The court ruling was the necessary deterrent.

As we know, the situation at Just Born is not a novel one. It’s clear that a substantial crisis exists in this country around defined benefit pension plans. According to research conducted by Boston College, the country’s 1,400 multi-employer pension plans are facing a combined $553 billion shortfall. Solutions to this crisis will require a multifaceted approach from the legislature, at the bargaining table and from defined benefit funds as a whole. While there will be no easy solutions, it is beyond dispute that prompt action is needed. It appears that for many funds, like the one that covers Just Born’s employees, the best solution would be a legislatively imposed one. We all hope that Congress works with all necessary speed to implement corrective legislation that will aid ailing pension funds. Lawmakers must be made to recognize that our country cannot afford the further erosion and diminution of retirement benefits that workers have earned with a lifetime of labor and loyalty to their employers. Workers deserve better.