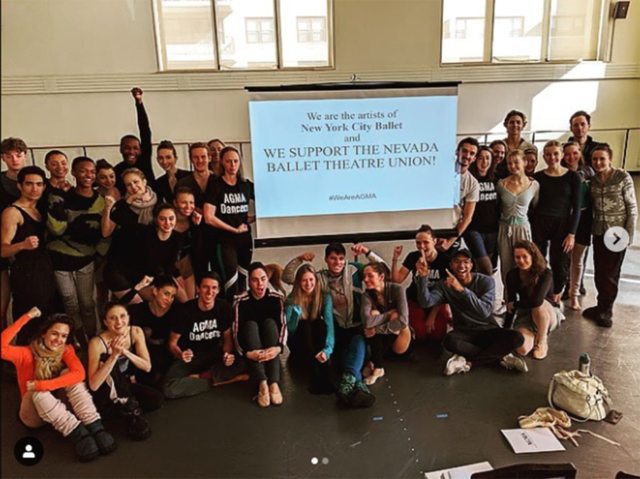 WHEN UNION MEMBERS STICK TOGETHER, THERE’S STRENGTH: Dancers of the New York City Ballet (above) recently showed their support to the artists of Nevada Ballet Theatre during their recent successful campaign to form a union with AGMA. (photo: www.instagram.com/musicalartistsunion)

In our busy lives, it can sometimes be easy to lose sight of what matters, whether it’s friends, family, last year’s New Year’s resolutions, or professional goals. As we continue our day-to-day hustle in the new year, we may get sidetracked. One thing I think it’s become too easy to forget is the importance of unions. Sometimes the noise produced from decades of anti-union assaults across industries, in our courts, and by some politicians makes it hard to remember that unions are the best protection any worker has from unfair treatment.

As I enter my third month at 802, I have seen the great impact the union has on our members’ lives, from ensuring timely payment of wages and securing health benefits to protecting our members’ intellectual property. Evidence from academic studies and practical experience keeps piling up to back this up: unions boost wages, provide benefits, protect members from arbitrary treatment, and create better, more professional workplaces. In the arts, where every day can be precarious, unions provide added stability. I want to take this opportunity to review the benefits of having a union, not just for musicians, but for any worker:

In the U.S., if you don’t have a union, you’re an at-will employee. That means that the employer can fire you (or demote you or cut your hours) for any or even no reason. As long as the reason isn’t prohibited by law (such as gender or racial discrimination), then there’s no limit on what the employer can do. An employer can fire someone without any warning or explanation. Most union contracts include “just cause” provisions that require employers to provide a legitimate reason for termination. This holds employers accountable and forces them to run a more professional operation.

In many industries, unions make the workplace more professional through clearer expectations and work rules. Sometimes union contracts can seem thorny and cumbersome, but they are often the result of workers’ input on how to best perform their roles. At Local 802, we see this in our rules about scheduling, breaks, premiums, and other rules that ensure the efficient operation of an orchestra, band, or production.

The average union worker makes 28 percent more than their nonunion counterparts. That’s the difference between $30,000 and $38,400. That’s quite a significant jump, especially when you consider dues are just a small fraction of pay. The effect unions have on pay spills over into the wider economy. One study last year from Princeton and Columbia professors found that unions, when they were at their strongest, reduced inequality not just for union members but across the entire economy. That matters especially now as the gap between the richest and poorest households in the United States is the widest it has been in 50 years, according to the U.S. Census Bureau.

Union contracts are often ahead of the curve when it comes to fighting for equality across racial, gender, and other lines. Having a union has been shown to narrow the racial wealth and income gaps. African American workers in unions earn 33 percent more than their nonunion peers, while Latino workers earned 42 percent more. Union women are paid 94 cents for every dollar paid to men in unions, while female workers outside unions only earn 78 cents for every dollar earned by nonunion men. Additionally, union contracts were among the first legally binding protections for LGBTQ workers before advocates won changes in the law.

The difference between having a union and not in this area is staggering: 94 percent of union members working full-time had health insurance compared to 65 percent of nonunion full-time workers. The same proportions of union members to nonunion workers had access to retirement plans to provide security after they stopped working.

With weak laws in this area, unions prioritize ensuring that their members enjoy healthy and safe environments. Many studies have shown that union workplaces experience lower injury rates and workers have greater recourse and power in fixing unsafe conditions.

Increasingly, unions are consciously working to improve the communities that their workers serve and live in, focusing on critical matters like environmental protection and racial justice. Just to give two examples: SEIU Local 8 in Florida demanded an end to state investment in fossil fuels, while the Denver Classroom Teachers Association demanded restorative practices that deemphasized disciplinary practices shown to aggravate racial disparities.

In short, unions ensure that we’re not alone as we fight for fairness at work — and give us a shot at winning things that alone would be impossible. Yes, unions aren’t perfect and Local 802 has its share of the challenges that the labor movement faces, but in my opinion the advantages far outweigh the disadvantages. In the new year, I hope we work together to strengthen our union and make sure musicians are proud to be part of it.