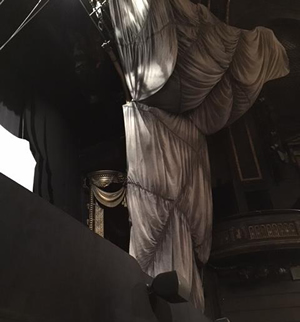 This “Phantom” story happened more than 20 years ago. Before every show, the chandelier, which is on the stage and covered by a tarp, is uncovered by a stagehand, checked out and re-covered. That evening, when removing it, part of the tarp fell into the pit and hit a violin stand, knocking some music onto the floor. The stagehand went downstairs and into the pit to put the music back. As there were no musicians in the building yet and not realizing to which stand the music belonged, he took it with him when he went back to the stage to finish the preset, planning to give it to the first musician he encountered. Once onstage, he temporarily – or so he thought – put the music in the chandelier, leaning it between a couple candelabras. Then he managed to completely forget about the music by the time he finished the pre-set and, when he re-covered it with the tarp, he didn’t notice the music. When the chandelier was rising from the stage at the beginning of the show, after the auction and with the tarp magically disappearing, the stage manager noticed something in the chandelier. It was decided that the drop to the stage at the end of Act 1 should be cancelled. It would be too risky if anyone in the audience underneath the chandelier got hit by falling music. After intermission, the two violinist on the third stand noticed that there was no music for the second act on their stand, but they quickly fetched a spare violin book and finished the show. After the playout, with most of the audience gone from the theater, the chandelier was slowly lowered to the stage. The stagehand responsible for the event was there as the chandelier touched the stage. He removed the music and handed it down into the pit to one of the remaining violinists. Later, passing by the stage manager’s office, on my way out of the theater, I heard someone saying, “Tell me again how the music got onto the chandelier.”