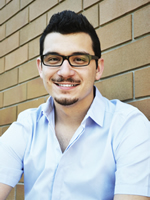 After spending 12 years in the nonunion freelance music world, I finally joined “Eight Oh Two” – three words one hears a lot traveling around the country, which is how I’ve spent the past six years of my life, touring North America and Asia in various Broadway tours as a drummer/percussionist. I joined Local 802 because it was time to prepare for my future, which for me means meeting some of the greatest musicians in the world. This “who ya know” factor is an integral part of getting gigs and pretty much how I’ve always gotten work. A favorite gig I’ve had in NYC was performing with the Kingdom Hearts Orchestra. The gig wasn’t entirely in my wheelhouse, but I took it. Saying no to a gig can sometimes be the correct thing to do. However I’ve learned that saying yes can push you to become a well-rounded musician – this is an interesting challenge that I’m always learning from. My goal isn’t to be the best percussionist in the world; it’s to humbly continue making a living doing what I love! Drum set is my primary instrument, but I enjoy music directing, orchestrating and arranging whenever I can. I look forward to continuing my musical adventure wherever and however that may be!