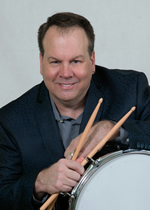 I am proud to say that I am now a member of Local 802. My musical friends have described how they’ve benefited over the years from their association with the union – including being listed in the Local 802 directory along with the most talented musicians in the world. At a young age, I played drums professionally all over New England and beyond. I met so many amazing entertainment personalities and musicians over the years. It was such a wonderful and rewarding experience. But sometimes the pay wasn’t always very rewarding, and eventually I ventured off the musical path and pursued other creative avenues, such as working in the New York Press Corps as a news photographer for many years, and more recently doing feature film and television acting since 2015 while meeting other NY musicians. Now I have returned to drumming with a whole new excitement for the drumming life. I play drums, percussion, congas and timbales. Being a member of Local 802 empowers us to be successful in our calling as musicians and protects us from those who would have musicians work for substandard wages.