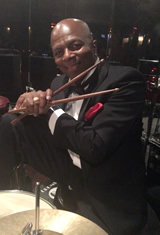 I joined Local 802 because I simply felt that it was time to do the right thing and help our industry. I’d like to help increase the level of jazz organization (musicianship, pay and benefits) and to get more work as a musician in general. In NYC, one of my favorite gigs was playing the Blue Note with Eddie Palmeri. Eddie is so phenomenal to work with, and it’s a joy to play Latin music. Another favorite gig was a tribute to Peggy Lee at the Allen Room at Jazz at Lincoln Center. Besides the great pay, it was a wonderful gig overall, playing with an awesome vocalist and musicians. I played tenor saxophone professionally as a teenager. I backed up many people (like Brooke Benton) in the first band I played in and we even recorded a record backing an R&B singer that wound up on the radio charts. I stopped playing at age 17 to get my academics together. I didn’t start playing drums seriously until my father gave me a drum set on my 20th birthday. I did a tour six months later with a guy who had a hit song. In 1980, I turned down a job with James Brown to play with Sun Ra and his Arkestra (which I had just joined). Since then, I’ve played with Barry Harris, Marcus Miller, Lionel Hampton, Freddie Hubbard, the Allman Brothers Band, Tony Bennett and Gladys Knight, to name just a few. Most recently, I did seven different gigs with seven totally different bands in Germany and again in Japan. I also play in my church. I cannot imagine this world without music. I really believe it is our saving grace and that we need to bring back more live music, made with real musicians, playing real instruments. If you judge a society by its music, you can easily see what’s wrong in our world today. Let’s MAKE MUSIC great again!