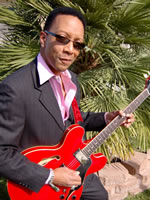 I joined Local 802 because in the current political climate, it is more important than ever to support the labor movement. Unions are responsible for all of the fair labor practices that most workers enjoy every day. I recently ran for town council and got the support of the Working People’s Party. It was then that I realized I have to participate in the union that represents musicians in New York. I am a feature performer with Soulsystem Orchestras, performing for corporate clients internationally as well as weddings and smaller affairs. I also have a solo act that I perform in various venues. In 2016 I formed MUSIC4LIFE, LLC through which I provide themed music performances for senior centers, assisted living facilities, rehabilitation and nursing facilities. One of my favorite recent gigs was performing the ABBA song “Dancing Queen” at a private birthday party in Moscow while the king and queen of Sweden sang along! I’ve enjoyed collaborations with a huge array of top artists, including Bo Diddley, the Flamingos, the Del-Vikings, Lou Christie, the Shirelles, Heatwave, the Cover Girls, DJ Grand Mixer DST, Alex Bugnon and Bob Baldwin. As a Las Vegas resident and performer for over six years, I played guitar for the Platters, Coasters and Marvelettes tribute show at one of the casinos. At a very young age, my parents exposed me to many types of music; my dad grew up in Harlem during the Big Band era and had a great record collection with everything from Louis Jordan to the Beatles and Beethoven. I plan to use my union membership to meet other professional musicians and continue to learn about the business. I also want to encourage others to join and support Local 802.