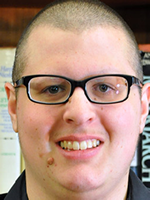 I joined Local 802 to cultivate new relationships and learn more about what it means to be a New York City musician. One of my favorite recent gigs was when I directed a parody musical of the TV series “Dexter.” Not only was it an amazing book and score, but the actors made it fun and worthwhile at every rehearsal and performance. I began studying piano in New Hampshire at age five after being inspired by my mother’s playing. I took lessons until fifth grade when we chose to move back to New York City so I could study further. I enrolled in Mannes College’s prep program, where I studied voice and piano. I then attended Hamilton College, where I worked as a staff pianist for the music department, accompanying vocal and instrumental students. I also had the opportunity to music direct and produce a charity cabaret each year filled with various musical theatre numbers. I have worked as a pianist and music director in New York City since 2014 on various productions, from short workshops to full musicals. Music has given me the opportunity to create long-lasting relationships and learn more about myself and the world around me.