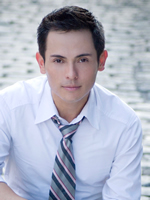 I joined Local 802 because I’ve been looking to get into the Broadway music copying scene. As I’ve been talking to people already working in the field, one of the questions that kept coming up was “Are you a member of Local 802?” I figured the next logical step was to join. I have two musical goals in NYC: to be a singing actor, and to be a music copyist. One of my favorite gigs ever was getting a chance to restore two scores and parts to be used by the National Symphony Orchestra. My sheet music sat in front of a world-class conductor and an ensemble made of some of the absolute best instrumentalists in the world, and that was beyond thrilling. A close second would be getting to conduct the score of “Rent” from the piano this past summer. “Rent” was the musical that turned me on to musical theatre, so it was a really nice, full-circle moment for me.  I was born and raised in Costa Rica, and grew up listening to a lot of classical music. My family and I moved to the Washington, D.C. area when I was 13. Once I reached high school, I enrolled in band and piano classes, learned to play every instrument I could get my hands on (clarinet being the main one), and joined every musical ensemble possible. I also took private piano lessons my junior and senior years. I went on to attend a community college where I joined the wind ensemble, and I got my first taste of acting in a musical.  I earned a B.Mus. in musical theatre at the University of Miami. Music has been a constant and positive influence throughout my entire life. No matter what point in my journey I look back on, music has played a major role; and when I look to the future, it’s there too. It moves me like nothing else can.