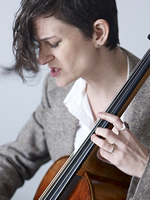 I’m excited to hold the cello chair at “Oklahoma!” on Broadway. It was a wonderful reason to re-join the union, and I’m seeing firsthand how integral Local 802 is to the life of a Broadway musician. My musical goal in NYC is to participate in exciting, inspiring musical ventures and make my living doing it. I premiered my autobiographical multimedia song cycle “ThisTree” at the 2019 Prototype Festival. I developed the work over the past three years through the HERE artist-in-residency program. It’s my first theatrical production as creator of both the music and script, and I worked with the most amazing all-female band! I started out in the classical world, studying with Irene Sharp at the San Francisco Conservatory and Bernard Greenhouse at New England Conservatory. After I moved to New York, I started writing songs, accompanying myself on the cello, playing in rock bands and exploring different musical genres. Music is my main mode of expression and exploring ideas, and it continues to be the most satisfying, fun and challenging aspect of my life. Besides playing in “Oklahoma!”, I perform in the Scorchio String Quartet, the Obie-winning show “Secret City,” and Music Under New York. I also have a private cello studio and I do all kinds of freelance work on cello and vocals.