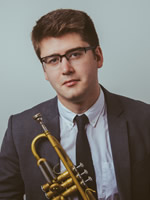 I joined Local 802 because I want to be part of an organization that supports professional musicians as I venture into the freelance world of New York City. Having the opportunity to connect with other professionals who are actively engaged in a similar journey is also of great value to me. While in New York City, I want to play with as many different ensembles as I can. As a trumpeter, I try to play and understand as many different styles of music as possible. Whether it’s performing in an orchestra, jazz combo or folk band, I’ve found the more varied I can make my experience as a musician, the better a musician I become. I recently played on a recording session for composer Du Yun. The piece that I recorded on was for five trumpets and electric guitar. We rehearsed a few times in the city and then recorded at a studio in Mt. Vernon. Du Yun was incredible to work with. During the rehearsals and recording session, she would often get new ideas for how she wanted sections of the piece to sound, giving the piece more of an improvisatory feel. The other musicians were also an absolute pleasure to work with. I began studying music at age 10, when I chose to play the trumpet. My parents introduced me to jazz music soon afterwards and I became hooked, collecting jazz albums throughout middle school. When I was 14 I enrolled at Interlochen Arts Academy where I studied both classical and jazz trumpet. It was here that I was exposed to a lot of the great classical repertoire, and found a community of people who had similar interests. I then attended Juilliard for my undergraduate degree in trumpet performance and studied primarily with Mark Gould and Ray Mase. I recently earned my master’s from the Yale School of Music, where I also held the jazz studies teaching assistant position. Music helped me discover who I am as a person and has led to making connections with people that I value more than anything. I currently play in various orchestras and chamber ensembles around the New York area, and have recently become a member of The Brass Project. I’m also looking to expand my teaching studio in the New York City area.