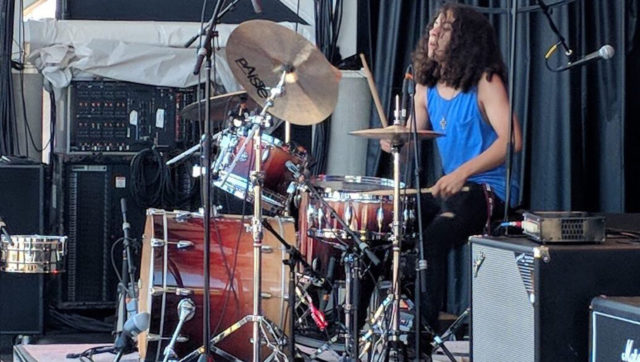 I joined Local 802 after I was asked to take a sideline part in the upcoming series “Wu Tang Clan: An American Saga.” Since I was 8 years old, I’ve been playing at the School of Rock Music School in
Roslyn (Long Island). I also play in my high school and in my own band. Although my musical goal is to someday play Madison Square Garden, my most favorite recent gig was playing Summerfest in Wisconsin. Playing outside on amazing stages with awesome sound quality is what made it so great. I’ve also had the privilege to perform alongside Local 802 member Omar Hakim as well as write and perform the drum parts in several original songs by actor/musician Jonathan Goldstein, star of Nickelodeon’s “Drake and Josh.” I also recently shared the stage with Robin Wilson of the Gin Blossoms; I played the drums with him for a benefit show. My parents introduced me to music at a very young age. I grew up listening to classic rock, R&B, hip hop and pop, but, my true love is rock. I love Led Zeppelin. I started playing the drums when I was 7 and have now become proficient at guitar, bass and singing. I was socially awkward when I was younger, and I learned that performing and making music are something I love. Music is the one thing I truly connect with. I know I will be doing this for the rest of my life. –Ben Bustamante, gingeel@yahoo.com