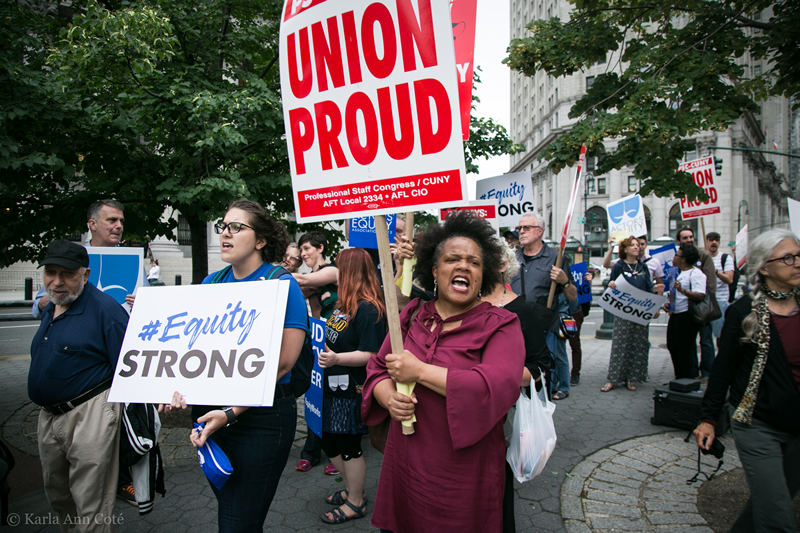 By now, we’ve all had time to absorb the horrible implications of the Supreme Court’s decision in Janus vs. AFSCME, which was decided over the summer. In a nutshell, the decision means that public employees who choose not to join their union are no longer required to pay their fair share of union fees. Predictably, it was another 5-to-4 decision, with Justice Kennedy providing the crucial vote against the labor movement. Interestingly, there were some who thought that the late Justice Scalia might have favored the union’s position. Although Scalia was a conservative and most often anti-labor, he was quoted by some journalists as having said, off the record, that he thought that people should pay for services they receive – even if those services are provided by a union. Had he lived, it is just possible that Scalia would have favored the union and Janus would have gone down.

The plaintiff, Mark Janus, was until recently a California schoolteacher. His lawyers argued that his First Amendment rights were violated when we was forced to associate with an organization (his union) that he didn’t want to. The teachers’ union, on the other hand, took the position that Mr. Janus was obligated to pay for the benefits and services he was getting.

The upshot of the decision is that public workers may now choose to become “free riders” and enjoy all the benefits of their union contracts without paying for them. These public workers include schoolteachers, first responders, government employees, and many others.

New York, which is the state with highest union density, has tried to limit some of the damage of Janus. A recent amendment to the state budget says that public unions don’t have to provide certain services to workers who don’t join the union, including free legal representation, pension counseling or continuing education. But this doesn’t affect the basic “free rider” problem. Public unions – even in New York – will still be required to represent non-members in collective bargaining.

It’s worth remembering that the First Amendment argument used in the Janus case applies only to public employees. Private employers are allowed to make rules limiting their workers’ speech. Therefore, private unions – like Local 802 – are currently allowed to require workers to join the union or pay an equivalent fee, except in states where “right-to-work” laws exist. And it’s common knowledge that in those right-to-work states, wages are lower and benefits are worse. Fewer members means there is less money for unions to negotiate decent contracts, organize new members and influence lawmakers to pass better labor and economic legislation. Unions in right-to-work states often have to hire full-time staff just to persuade workers to stay in the union.

It is likely that the Janus decision will encourage more states to pass right-to-work laws. In fact, there is a committee in Congress that is drafting a national right-to-work law that would affect all union workers, including Local 802 members working under our union contracts. If this awful bill were ever to pass, some musicians might quit the union – either voluntarily or due to pressure by their employers. Even if only a small number of musicians were to leave the union, Local 802 would be weakened, and management everywhere would jump at the chance to reduce wages, benefits and job security.

Therefore, the NYC Central Labor Council has urged all of its affiliates, including Local 802, to prepare now. We must all understand what can be lost if the unions do not maintain their membership and their strength. The CLC is planning a series of workshops, internal organizing committees and worker-to-worker contacts. We will do whatever is necessary to maintain and grow our union’s strength. The CLC hopes that musicians and other union members will feel more committed to their unions and will resist all attempts to weaken the labor movement.

CLC President Vincent Alvarez said recently that better communication among union leaders, union activists and union members will result in a stronger commitment to union values. A union membership that is enthusiastic about their union’s goals and policies will be in the strongest possible position.