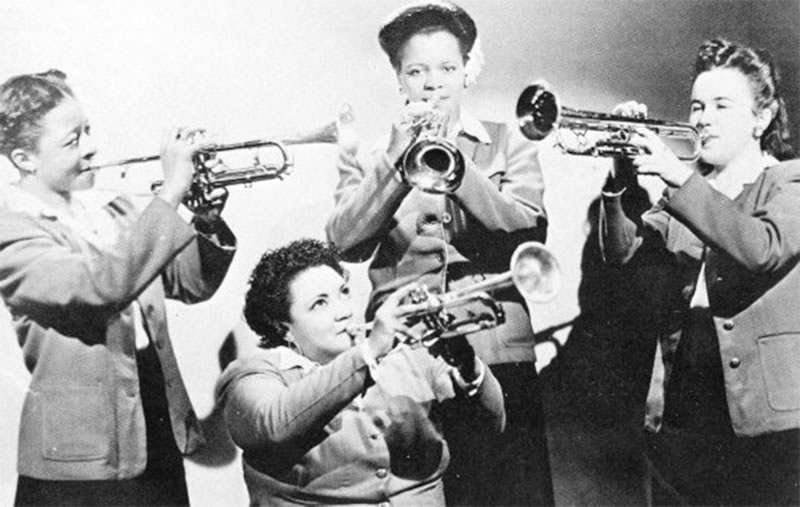 The International Sweethearts of Rhythm, active during the 1940’s, was the first integrated all-women’s band in the United States. (As many know, Local 802 member Carline Ray played bass in the group.) Pictured above is the Sweethearts’ trumpet section in 1944: Ray Carter, Johnnie May Stansbury, Toby Butler, and Ernestine Tiny Davis.

After 90 years of “equality” – beginning with the passage of the 19th Amendment, which granted women the right to vote – women jazz instrumentalists are still subject to what I call the Equal But Separate syndrome.

The phrase harks back to the Jim Crow era in the South, when “Separate but Equal” was a doctrine of constitutional law allowing individual states to employ segregation, even though according to the 14th Amendment, all citizens were entitled to equal services.

During segregation, the law said that African Americans were to receive their own services and accommodations apart from whites, and that they were to be equal to those white people received. In reality, however, blacks rarely got the same quality of services as whites. It took decades, and much struggle, to eradicate this doctrine.

The efforts of women to be recognized as equals of men in our society bear a resemblance to the civil rights movement in many ways. The last two centuries clearly show women being denied jobs, political office and access to education. Neither was harassment unheard of.

Happily, things have changed in recent times. But since I first came to New York in 1982, my female colleagues and I have struggled against the tendency of promoters to lump us together in all-female groups. Almost 30 years later, this is still happening.

No jazz fan or jazz musician denies that the best women players are on a par with the best male players, but a division exists nonetheless. While the all-woman groups and festivals certainly are an opportunity for women musicians to perform and earn income, they have also been the excuse to exclude women players from the mainstream. Yes, there is sometimes a woman member in a jazz group, or a woman composer or arranger who gets hired, but women often are still relegated to all-female scenarios. Equal but separate.

Promoters use the ploy for at least three reasons:

Jazz music has benefited greatly from its interaction with other styles of music such as Latin, Brazilian and classical, to name a few. Because jazz is shaped more by its players than its composers (as opposed to classical music, where the opposite ratio occurs), it makes sense that it would be enriched – as indeed it has been – by the different backgrounds that players bring to the bandstand. Certainly this idea extends beyond race, color and culture to the very foundation of humanity: men and women. As my colleague Francesca Tanksley said once, “There are two genders on the planet, hello!”

It’s not that it’s a bad idea to have an all-woman group. I have played in many such groups that were quite excellent. The issue, rather, is that relying on the all-female theme to highlight women players does a disservice to women, a disservice to men, and a disservice to the music. If women want to play together, surely they can do so without being categorized. There are a lot of all-white groups, all-black groups, and all-male groups – but they are not billed as such!

Why this happens so often in jazz is a mystery. Does the phrase “Women in Jazz” have a nicer ring than the rarely heard “Women in Rock,” “Women in Pop,” or “Women in Classical Music”? In those genres one often sees guys and chicks playing together and no one makes a big deal out of it.

Ironically, in the light of the jazz industry’s apparent prejudice toward women, the color barrier in the United States was first broken by jazz musicians. In 1935, Benny Goodman hired the African American pianist Teddy Wilson in his trio. The following year, African-American vibraphonist Lionel Hampton was added, making it a quartet. (Gene Krupa was on drums). This was 11 years before Branch Rickey signed Jackie Robinson to the Brooklyn Dodgers in 1947, ending segregation in the Major Leagues. It was 18 years before Brown vs. the Board of Education. It was 28 years before the Civil Rights Act of 1964.

We are at a strange crossroads. Isolated women are working their way into traditionally all-male groups, while the Women in Jazz festivals continue to serve a very important function: presenting the formidable talents of that other 50 percent of the population. Without these festivals, surely female jazz players would receive even less recognition than they do.

I have always believed that for jazz to continue its remarkable evolution of a mere 100 years, it must embrace all players, regardless of race or gender. Unfortunately the bandleaders in jazz, on whom this responsibility should fall, have largely been remiss in recognizing that idea.

Charli Persip, Howard Johnson and the late Dr. Billy Taylor are amongst the few leaders who have consistently championed women players and mixed bands. If all bandleaders did this, the need for all-woman venues would diminish rather quickly.

Perhaps nature has arranged it so there’s just no getting around the woman vs. man thing. After all, the female of almost every species still sports its own equivalent of makeup and high heels. But for Women in Jazz, the dichotomy has begun to wear thin, like a word that you keep repeating to yourself until it loses its meaning.

In today’s world of same-sex marriages, drag queens and other transgender folk, one could even question what defines female and male in the first place. The 5,000-year old philosophy of Taoism, encapsulated in the famous yin-yang symbol, tells us that there is no such thing as totally female or totally male because as soon as those points are reached, they begin to reverse themselves. Moreover, the yang (male) sign – symbolized by the color white – contains a tiny, black dot of yin (female). And inside yin, likewise, a bit of yang resides.