I  hope everyone had a relaxing summer. For me, there was lots of union activity on the front burner. Here’s just a sample of what we accomplished in the past few months:

The summer started with a low blow when the Supreme Court made a viciously anti-union decision in the case of Janus vs. AFSCME. Soon after, the entire NYC labor movement took part in protests. Please see Marvin Moschel’s story for more on what this decision could mean for all unions, and why we must remain vigilant. 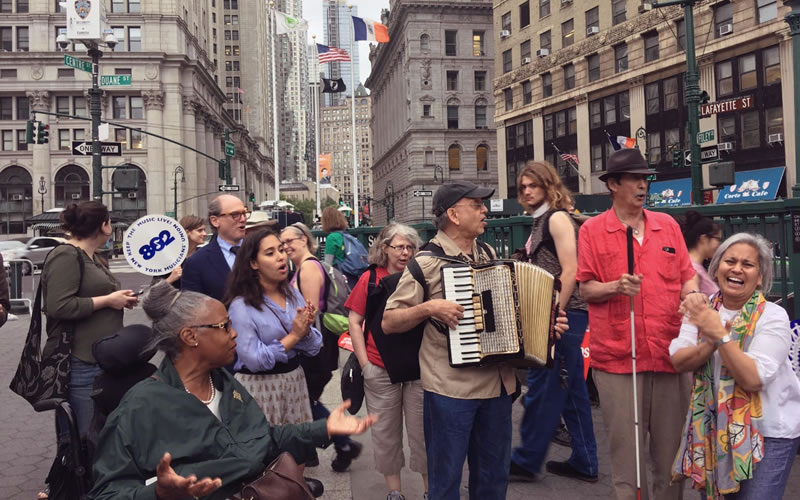 On the flip side, we celebrated when Missouri voters overturned a right-to-work law by an overwhelming margin. This was probably the best news of the summer, and it shows the level of union support by regular voters. The labor movement should take some much-needed encouragement from this victory.

We rallied in support of our national live TV contract, which covers musicians who play on late-night shows as well as live awards shows and sporting events. The biggest issue is that the networks don’t want to pay musicians when they appear on streaming platforms. We had over 100 people turn out to our main rally, which included a jam with the Polka Brothers, Local 802 Executive Board member Alvester Garnett, members of the Stephen Colbert band Stay Human and others. Our hashtag and rallying cry is #RespectTheBand. 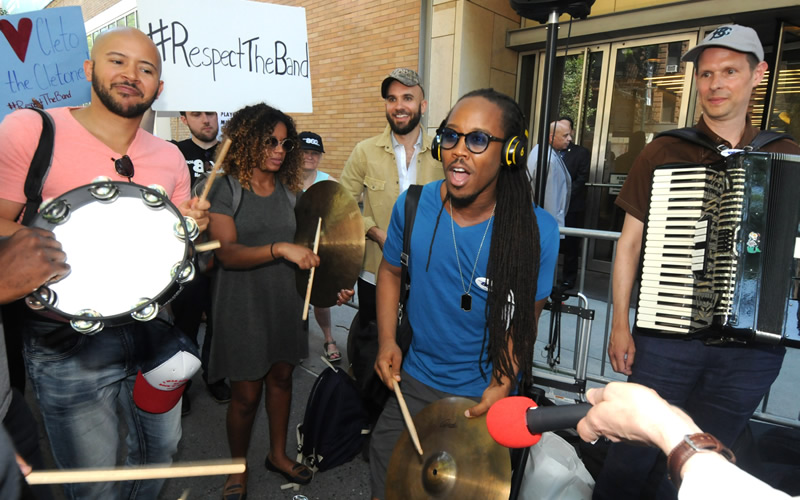 The AFM shared the news that the Senate and House both voted to increase NEA funding by $2.2 million (1.42 percent) for 2019. The two chambers will meet in the coming weeks to settle differences between their bills, and there should be one more round of votes before the bill goes to the president. Union musicians and other members of the arts community sent e-mails, made phone calls and had conversations with their elected officials about the importance of federal arts funding. When musicians join together, we can achieve amazing results.

We celebrated the fact that the dancers of the Alvin Ailey Dance Company successfully won their union contract. Congratulations, and we were proud to stand with you in your fight!

The Local 802 Executive Board approved our revised Commercial Off Broadway Area Standards rates. (Members can request the scales from the Theatre Department.) Separately, the board approved a contract covering musicians performing for the Yiddish Theatre Folksbiene production of “Fiddler on the Roof” and for a revival of “Smoky Joe’s Café.” Remember, any time you’re called to play musical theatre of any size – from a reading production up to a full show – please make a confidential call to our Theatre Department at (212) 245-4802. We can help you make sure you’re earning the pay and benefits you deserve.

We renegotiated our Single Engagement Club Scale Agreement, which sets our minimum rates for weddings and other jobs. The new agreement includes improvements suggested by club date musicians and their bargaining committee. Musicians were in need of better wages, especially for the work done on Sundays, something that all felt was underpaid relative to the top Saturday scales. We negotiated increases in all categories, including a more than 4 percent first-year increase in Saturday night scale, a 12 percent increase in Sunday 4-hour scale, and further bumps every April through 2021.  Cartage went up 40 percent, health contributions went up 25 percent, and the overnight rate went up to $100 from the previous rate of $55. We also increased the mileage and wait time fee and settled an important grievance. Thank you to Andy Schwartz, Harvey Mars, Shane Gasteyer and our entire Single Engagement and Field Services Department for negotiating these increases. The new rates took effect on July 15.

As you can see from our cover, we’re publishing an important look at gender and age discrimination in music. It’s something that we all have to work  together to fight against. We must constantly keep our eyes open. The first step is educating ourselves.

It’s election season, and it’s never been more important to vote. As Allegro went to press, the New York primary was only days away. Click to view a list of our endorsements, and please make every effort to vote on Thursday, Sept. 13. (Note that election days are usually on Tuesdays, but this year the New York primary is on Thursday to avoid a conflict with Tuesday, Sept. 11, which is when the nation remembers 9/11.) For more information on voting, including how to find your voting location, see www.elections.ny.gov.

NYC is a union town! Join Local 802 at the annual 2018 NYC Labor Day Parade (which actually takes place on Saturday, Sept. 8) as we celebrate our strength and pride as musicians – and as part of the NYC labor movement. We’ll be giving out breakfast, coffee and Local 802 T-shirts! Meet us at 9 a.m. on East 44th between Fifth Ave. and Vanderbilt. Look for the band float and the Local 802 banner. For more info, contact the Organizing Department at (212) 245-4802.