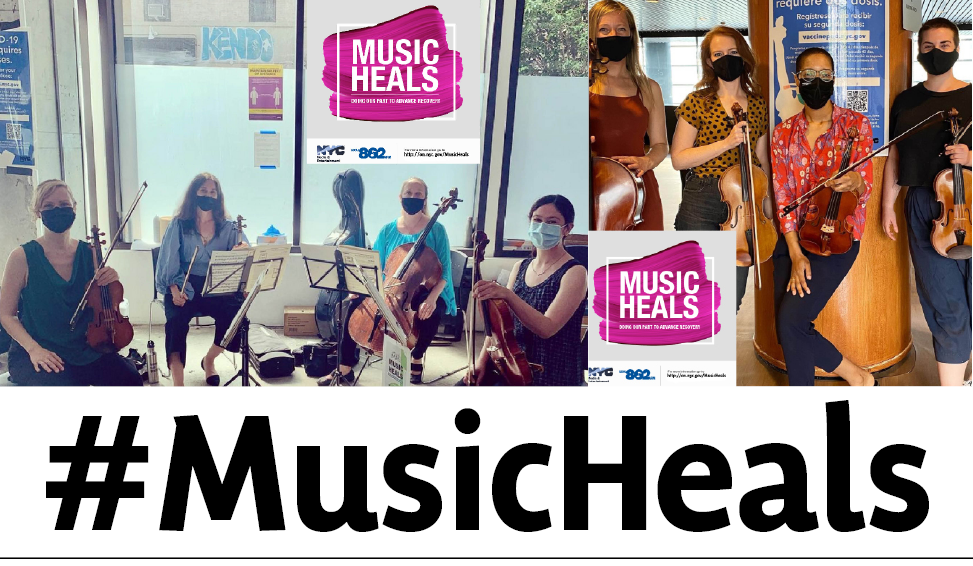 As the re-opening of New York continues to speed up, audience members are flocking to live music again and we’re feeling optimistic that our industry will bounce back stronger than ever. We’re constantly monitoring updates from Governor Cuomo, Mayor Bill de Blasio and the U.S. Center for Disease Control. Even though things change almost daily, what we do know is this:

The key to re-opening across all venues is vaccination, and we’re proud to be doing our part to encourage New Yorkers to get vaccinated through our Music Heals and Music For the Soul series of paid union gigs through our partnership with the NYC mayor’s office of media and entertainment.

Many 802 members are reporting to us that they’re playing paid performances again. This includes ensembles like the New York Philharmonic, St. Lukes, Orpheus, American Symphony and other smaller ensembles as well. Also — as we all know by now — Broadway is selling tickets for a fall re-opening.

Even though the government is making rules and recommendations, this is what we’ve noticed on a practical level: most employers appear to be deciding their own policies about vaccination requirements. These policies are always negotiated with the union and will be in flux as the pandemic continues to ease in NYC. We encourage all of our members to get vaccinated, which will pave the way for a safe re-opening of live performance. We’ll be able to share with you the latest updates at our June 30 membership meeting (on Zoom); click here to pre-register.

Just as we were feeling optimistic about the re-opening of NYC, we’re now faced with a problem at Lincoln Center that we need to share with you now.

Most of you know that Lincoln Center is producing a series called Restart Stages, which includes performances at Damrosch Park.

The problem is that Lincoln Center — even though it controls the money — is refusing to act as the employer of its musicians. Instead, it’s sending out nonunion contracts to our members and forcing musicians to negotiate directly with bandleaders and music directors. This shirking of responsibility means that there’s no union agreement or pay scale for Restart Stages.

The current recovery is very fragile. We need maximum support from arts institutions such as Lincoln Center, which is home to some of the largest employers of musicians in NYC. Money is flowing into NYC through the American Recovery Plan, and Lincoln Center is one of the beneficiaries. At this time more than ever, musicians need support — including a guarantee of fair wages and benefits.

We’re in touch with our elected officials to put pressure on Lincoln Center to do the right thing. We’re also considering other options. We’ll be in touch with you about how you can help and what you’ll need to know as we move forward.

If any of you have been asked to perform at Restart Stages, please e-mail or call the Local 802 Hotline.

To put it bluntly: Lincoln Center has the responsibility, the duty and the moral obligation to pay area standards and assume the role of direct employer of musicians — instead of deflecting this requirement.

UPDATE ON THE MET

We thank all the unions and elected officials who came together for our WE ARE THE MET rally on May 13. Hundreds of people showed up. I would like to share the remarks I made that day, which provide a good overview of where we are with the Met negotiations.

If you go back 14 months to the start of the pandemic, there’s one thing that has to be called out that’s different here at the Met than at any other venue or music producer in the country — or the world. Peter Gelb and Met management saw the pandemic not as an opportunity to help their workers survive — or even how to continue to produce art, which is their mission. Instead, they saw it as an opportunity to attack union contracts and extort wages and benefits from their workers, including musicians, stagehands and all of the arts workers. This isn’t new at the Met, unfortunately. For many years, Met musicians, stagehands and other arts workers have fought off concessions and done their part to help the Met survive. And then the pandemic hit. And then Met management asked for more. Not only more, but they’ve asked for concessions that would set us back 20 years and would destroy the lives of our members.

That was 14 months ago. Over the summer, Peter Gelb and Met management outsourced our musicians’ work. In the fall, they came back to us with the same proposal from the spring of 2020 to gut our contract. Later in the fall, they locked out Local 1, and they literally took the work out of the hands of the stagehands. They outsourced their work, too.

Later in the winter, we started meeting with the Met management. We got the same proposal from them with no change: a proposal that would gut our contract. Now it’s June. We’re still bargaining. Our contract expires on July 31. We’re willing to do our part to make sure that the Met survives. In fact, the Met has to survive in order to be a world-class artistic institution, which is the part that Mr. Gelb forgets. It’s a world-class institution because many Local 802 members have dedicated their lives and careers to making it that way.

Now in June, the only person who hasn’t changed is Peter Gelb. Musicians are getting vaccinated. The arts are opening. NYC is funding programs. Broadway is selling tickets for the fall. The New York Philharmonic is doing performances. Lincoln Center is building spaces right before our eyes. The only person who doesn’t see that his job is to re-open the arts is Peter Gelb and the reason is because he wants to demand changes that will drastically alter our workers’ lives.

But there’s something that Gelb and his people don’t understand — and that’s the power that we have. We are the Met. We have collective power. And the path forward to victory is about leveraging our power and sticking together. It’s going to take every union and take every worker. It’s going to take the community, including our elected officials. We all need to fight for what is right. The Met is the only place that continues to try to self-destruct by destroying its workers’ contracts. So I have one thing to say to Peter Gelb: WE ARE THE MET!