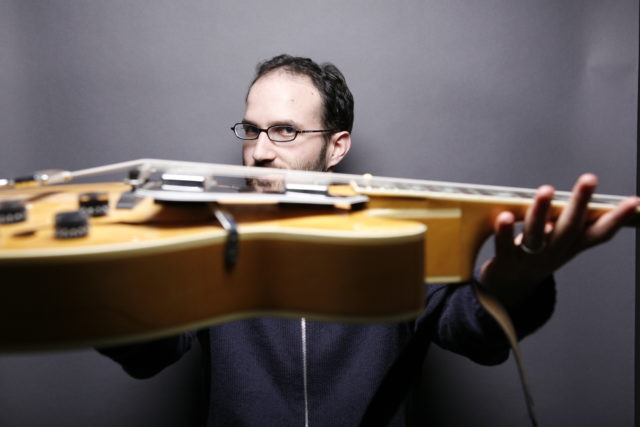 I joined Local 802 after being hired as the guitar/mandolin chair for “Fiddler on the Roof in Yiddish.” New York is such a rich place to be! I want to continue playing with and learning from as many people as I can. Other goals as a musician are to continue playing gigs that help develop my voice as a guitar player and a composer. I have written some for theatre and would like to continue doing that. I would also like to continue to perform more of my original music with some of the ensembles mentioned below for whom I compose, as well as playing original creative music with new people! I loved when we recorded the cast album for “Fiddler.” It was done at the Manhattan Center and it was a really exciting experience recording in such a large space with a large ensemble and cast. The energy in the room made for a special and memorable time. I was born in Israel, and started playing music there through being interested in rock music as a kid. This quickly developed to a focus on jazz and playing in various local jazz ensembles throughout high school and during my mandatory army service. In 2001 I moved to New York initially to study jazz at SUNY Purchase, where John Abercrombie was my guitar teacher. I have lived in the NY area since then, playing and composing for various ensembles in the jazz/Israeli/Jewish creative music world, as well as doing other work as a side musician. Music is important to me as a tool for communicating and exchanging cultural information both with other musicians and with audiences. It is also an intuitive communicating tool that can make connections without the baggage that sometimes comes with language. And most importantly, nothing brings me more joy than playing with other people! In addition to playing in the “Fiddler” orchestra, I am involved in a lot of projects: a high-energy guitar duo called Isra-Alien that plays original music inspired by the roots of Israeli music; a quartet called Sha’ar whose recent project was writing and performing new arrangements of the work of Yedidia Admon (a great but lesser-known early Israeli composer); I composed the score for “Suddenly a Knock at the Door,” a play by Robin Goldfin based on eight short stories by Etgar Keret; I accompany a couple of great singers in the Yiddish music world; and I also teach guitar privately.