It was just over a year ago – on Jan. 20, 2017 – that Donald Trump was inaugurated as the 45th president of the United States. Many of us have taken part in protests over the past 12 months about issues such as treating women with dignity and respect, funding the arts, welcoming immigrants, protecting the Dreamers, fighting racism, saving the environment, and making sure that the tax system in our country is fair and equitable. Local 802 member and Broadway Theatre Committee vice-chair Chris Reza gave his thoughts on the past year in a piece in our January issue aptly entitled “Trump: One Year Later.”

The anniversary of Trump’s inauguration was also the date of this year’s Women’s March, in which Local 802 participated (photos below). The march’s organizers wrote, “Over the past year, women, immigrants, the LGBTQ+ community, people with disabilities, the religious and nonreligious, people of color and even Mother Earth have struggled to survive under the weight of the current administration. America’s First Amendment has been challenged and healthcare for millions has been threatened. We must stand together to demand and defend our rights. Let your voice echo from the streets of New York City to the capital city. Show the world that red, white and blue are colors of tolerance.”

The NYC music world in a tumultuous time. First, there is the ongoing investigation of James Levine, who has been suspended from his duties as music director emeritus of the Metropolitan Opera. Both Local 802 and the MET Orchestra Musicians issued statements in December. The allegations against Mr. Levine, which he has denied, are appalling and heartbreaking, and we support any and all who may have suffered abuse. The Metropolitan Opera and all employers have an obligation to all employees to provide a safe workplace free of sexual harassment and discrimination. With regard to Mr. Levine’s membership in Local 802, it is our obligation as a labor union and community to look into these matters, and an internal investigation in accordance with the union’s due process and bylaws has begun to determine what actions may be warranted. The investigation of a member is never taken lightly, but sexual abuse has no place in our members’ places of work or anywhere in our society.

Separately, Peter Martins, the leader of New York City Ballet for three decades, retired after the company launched an independent investigation into allegations of sexual harassment. And Charles Dutoit stepped down from his post as artistic director and principal conductor of the Royal Philharmonic Orchestra in London following accusations he sexually assaulted several women. He had already been replaced from his scheduled conductor position at the New York Philharmonic.

Allegro’s cover story in December was a deeply personal #MeToo story from Local 802 member Camille Thurman. That story has prompted another Local 802 member – who wishes to remain anonymous – to bravely share her own story, with hopes that it will give courage and healing to her colleagues.

As musicians and artists who strive every day to create stronger, healthier and more vibrant communities, we condemn destructive behavior and reject harassment, discrimination and abuse in the workplace and in our culture at large. We are working internally to strengthen and bolster the process through which members can report instances of abuse, and we are taking a multi-faceted approach to ensuring that we are well prepared to assist those who need it. We will keep you apprised of these developments as we move forward. For more, see our new sexual harassment response and reporting procedure.

Finally, as Allegro goes to press, Local 802’s Feb. 7 membership meeting was fast approaching. The meeting includes a panel discussion about sexual harassment in the arts with participation by the City Commission on Human Rights and the Actors’ Fund. We’ll give you a full report in the next issue.

February is Black History Month, and perhaps we can get some inspiration from our own history. As one of only two AFM locals that was racially integrated from its inception, Local 802 had a good track record in the past of supporting all of our members from all backgrounds, as can be seen in the story about the union standing up for black musicians during the late 1930s and early 1940s. But how can we build on that history today? Last month, Allegro posed the question: how can we make sure that our orchestras – and all of our ensembles – are diverse and inclusive? Our cover story, written by MET Orchestra trombonist Weston Sprott and his colleague Shea Scruggs, gave concrete suggestions about how musicians and management can make change together and why it’s in everyone’s best interests to do so. I hope that it will amplify the ongoing conversation within our union about how to prioritize diversity and make it real.

Our new Emerging Artists Project has generated a huge amount of interest. We’re giving out a $40,000 grant (over four years) in partnership with Orchestra of St. Luke’s and the DiMenna Center for Classical Music. It’s clear that young musicians and new ensembles are seriously interested in this opportunity. Local 802 Executive Board member Sara Cutler put it best in her article in December: “Our mission demands that we find ways to strengthen our union, support live music, expand the amount of work covered by union agreements, increase the size and diversity of our membership and ensure that Local 802 remains relevant to performers who engage in all types, styles and genres of music performance.” Local 802 received 52 applications for the grant, and the judging and vetting process are now underway. We’ll keep you posted! For more, see Sara Cutler’s update below:

“The Emerging Artists Project has gotten off to an exciting start. Applications for the EAP closed on Jan. 8, and the response was overwhelmingly positive! A star-studded list of jurors is now in the process of reviewing over 50 enormously talented groups and ensembles. This process is being done completely “blind,” without access to information that will identify individual musicians, and without input from Local 802 staff. Once the judging is complete, we at 802 will use the input and recommendations from our esteemed jury to award the grant to one ensemble in late February. More in the next issue…” –Sara Cutler

Local 802 is encouraging members to contact their elected leaders over two pieces of legislation:

Don’t forget that Tempo 802, our Political Action Committee, is the tool by which our political and legislative work is made possible. It is entirely voluntarily funded, and every penny counts. Help us put some muscle behind our support for elected leaders in 2018 by contributing today, either online or by mail.

One a related note, I was proud to stand with my fellow officers and Local 802 Executive Board behind Mayor Bill de Blasio in December to show our strong resistance to Trump’s tax plan. The Trump Tax Scam unfairly burdens hardworking New Yorkers and seniors who have worked their entire lives for economic security and healthcare that is now under threat. Alongside our union brothers and sisters, we made it clear that we will continue fighting to protect working people in NYC. For more, see Marvin Moschel’s story.

As Allegro goes to press, Local 802 and Lincoln Center’s American Songbook have reached a tentative agreement guaranteeing area standards for the shows that are presented as part of the series. Musicians performing for American Songbook can now count on being paid according to the standards of the Local 802 Club Date agreement. The following is an excerpt of the language in the agreement: “All musicians employed by the performer shall receive wages, working conditions, benefits and standards of employment no less favorable than those set forth in the Local 802 Single Engagement Club Date Agreement.”

I would like to thank Recording Vice President Andrew Schwartz as well as Local 802 business reps Sarah Koshar and Lily Paulina for all of their hard work and dedication in helping to bring these negotiations to a successful close. We continue to urge all musicians who are engaged to perform for American Songbook to contact recording vice president Andy Schwartz at (212) 245-4802 ext. 110 to ensure they are being compensated fairly with area standard wages and benefits.

Guess how much bands get paid when you watch the late night shows of Jimmy Fallon, Seth Meyers, Stephen Colbert, James Corden or Jimmy Kimmel on YouTube and network web sites? Zero. The networks pay other performers when they stream these shows – but musicians are not paid for this work. It’s not just these shows – it’s all “live” television programs (awards shows, talk shows, morning shows and sports broadcasts). Musicians working on live television shows aren’t paid when shows or clips are “free” to watch online. But these “free” shows aren’t really free – they are supported by paid advertising just like broadcast television. Other performers are paid residuals when live television shows stream. This is about all musicians being respected and treated fairly. Musicians have been negotiating a new contract for over a year, but the networks refuse to pay musicians for all of their work. The contract covers musicians who have regular gigs – but it also includes hundreds of other musicians performing on live shows as guests, as subs, on awards shows, or at sporting events. We need your help in calling on the networks to Respect the Band. Join the fight to ensure musicians are treated fairly. Join us today at www.afm.org/band. Musicians standing together have the power to earn respect and get paid for their work.

In last month’s issue of the International Musician, a story about the AFM’s new Internet Streaming Promotion Agreement did not mention that the three-minute usage of material cannot be used for the promotion of any theatrical production. Any request to capture a performance from any theatrical production – including workshops, Off Broadway, regional theatre or Broadway – has to be brought to Local 802 to determine the appropriate AFM media agreement before such capture can be approved and utilized.

Members, friends and supporters of Local 802 marched together at the Women’s March. See Marching Together for more photos and thoughts from Local 802 musicians. Photos by Walter Karling. 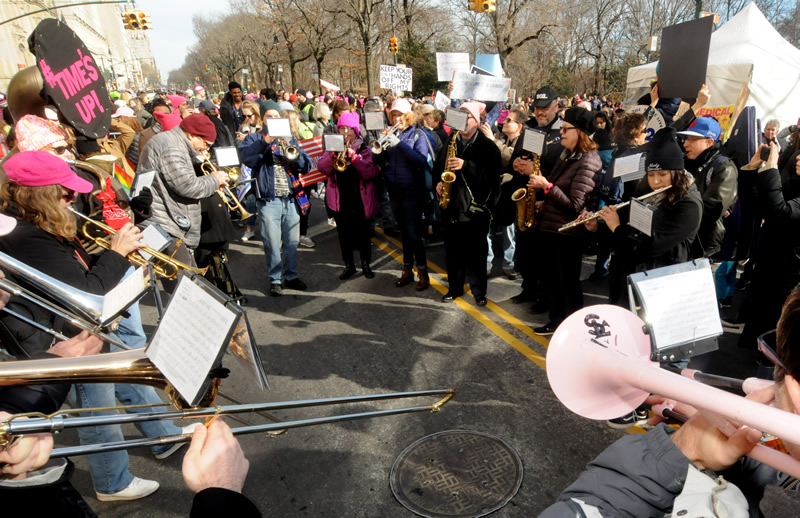 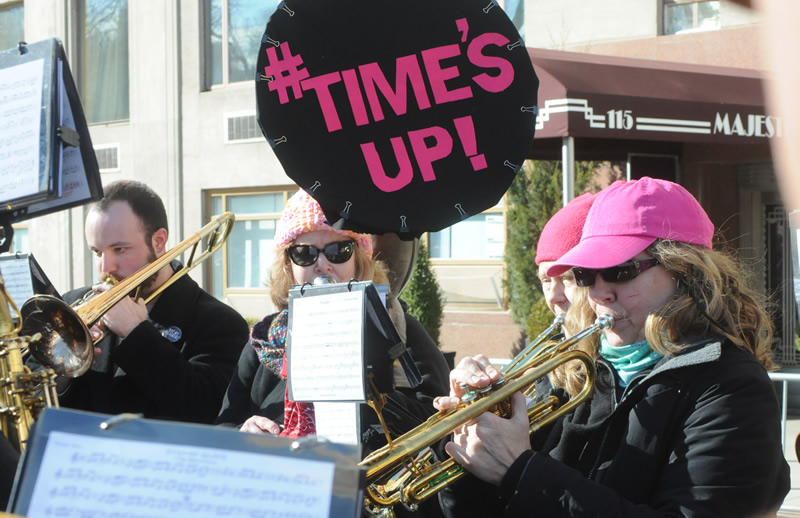 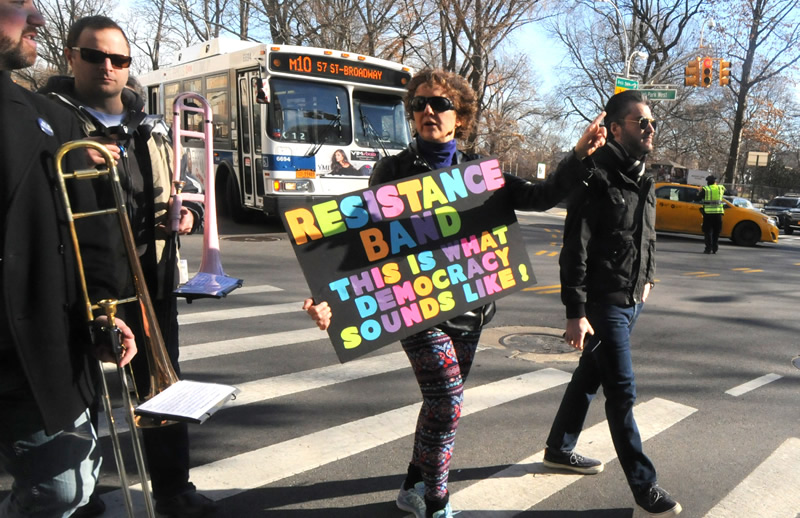